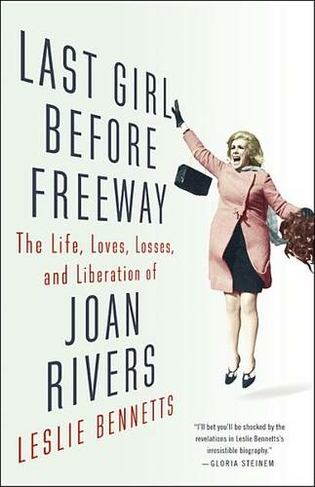 Named one of "40 Gifts for the Book Lover on Your List," by Good Housekeeping The definitive book about Joan Rivers' tumultuous, victorious, tragic, hilarious, and fascinating life. Joan Rivers was more than a legendary comedian; she was an icon and a role model to millions, a fearless pioneer who left a legacy of expanded opportunity when she died in 2014. Her life was a dramatic roller-coaster of triumphant highs and devastating lows: the suicide of her husband, her feud with Johnny Carson, her estrangement from her daughter, her many plastic surgeries, her ferocious ambition and her massive insecurities. But Rivers' career was also hugely significant in American cultural history, breaking down barriers for her gender and pushing the boundaries of truth-telling for women in public life. A juicy, intimate biography of one of the greatest comedians ever-a performer whose sixty year career was borne, simply, out of a desire to make people laugh so she could feel loved-LAST GIRL BEFORE FREEWAY delves into the inner workings of a woman who both reflected and redefined the world around her. Illustrations

Leslie Bennetts is the author of the national bestseller The Feminine Mistake as well as a longtime Vanity Fair writer and former New York Times reporter. At Vanity Fair she wrote many movie star cover stories in addition to articles on subjects ranging from priest pedophilia to U.S. antiterrorism policy, and she was the first woman ever to cover a presidential campaign at the New York Times. Bennetts has also written for many other magazines, including New York, Vogue, More, The Nation, and Glamour.