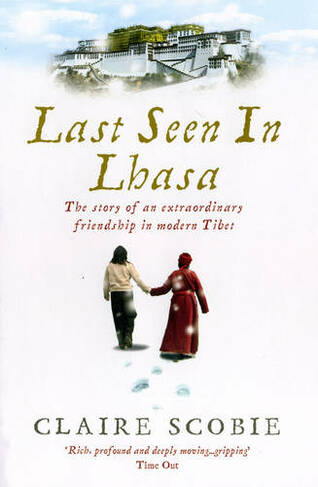 Last Seen in Lhasa: The story of an extraordinary friendship in modern Tibet

By Claire Scobie (Author)
Paperback
https://www.whsmith.co.uk/products/last-seen-in-lhasa-the-story-of-an-extraordinary-friendship-in-modern-tibet/claire-scobie/paperback/9781846040061-01-000.html £11.95 rrp £12.99 Save £1.04 (8%)
GBP
Availability
Currently unavailable. We don't know when or if this item will be back in stock
Free Saver Delivery on orders over £20
Details
FREE SHIPPING over £20 for Saver Delivery
Share

Some go to Tibet seeking inspiration, others for adventure. The award-winning journalist, Claire Scobie, found both when she left her ordinary life in London and went to the Himalayas in search of a rare red lily. Her journey took her to Pemako, where few Westerners have set foot and where the myth of Shangri-la was born. It was here she became friends with Ani, an unusual Tibetan nun who was to change her life. Through seven journeys in Tibet, Claire chronicles a rapidly changing world - where monks talk on mobiles and Lhasa's sex industry thrives. But it is Ani, a penniless wanderer with a rich heart, who leaves an indelible impression. Together, in a culture where freedom of expression is forbidden, they risk arrest. And they forge an abiding friendship, based on intuition and deep respect. Evoking the luminous landscape of snow peaks and wild alpine gardens, Claire Scobie captures the paradoxes of contemporary Tibet, a land steeped in religion, struggling against oppression and galloping towards modernity. Last Seen in Lhasa is a unique story of insight and adventure that can touch us all.

Claire Scobie studied History at Cambridge, where she won an award as Best Features Journalist for the student newspaper. On graduating she worked for the Saturday Telegraph Magazine for three years and won the Catherine Pakenham Award as Best Young Journalist of the Year. Since then she has written for numerous publications including the Daily Telegraph, The Observer, Scotsman on Sunday, The Age, The Bulletin and The South China Morning Post. She has been living in Australia since 2001 but travels widely.