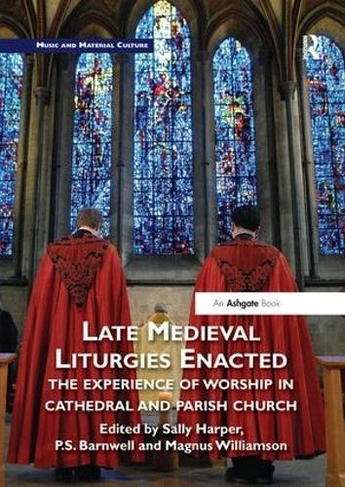 This book critically explores ways in which our understanding of late medieval liturgy can be enhanced through present-day enactment. It is a direct outcome of a practice-led research project, led by Professor John Harper and undertaken at Bangor University between 2010 and 2013 in partnership with Salisbury Cathedral and St Fagans National History Museum, near Cardiff. The book seeks to address the complex of ritual, devotional, musical, physical and architectural elements that constitute medieval Latin liturgy, whose interaction can be so difficult to recover other than through practice. In contrast with previous studies of reconstructed liturgies, enactment was not the exclusive end-goal of the project; rather it has created a new set of data for interpretation and further enquiry. Though based on a foundation of historical, musicological, textual, architectural and archaeological research, new methods of investigation and interpretation are explored, tested and validated throughout. There is emphasis on practice-led investigation and making; the need for imagination and creativity; and the fact that enactment participants can only be of the present day. Discussion of the processes of preparation, analysis and interpretation of the enactments is complemented by contextual studies, with particular emphasis on the provision of music. A distinctive feature of the work is that it seeks to understand the experiences of different groups within the medieval church - the clergy, their assistants, the singers, and the laity - as they participated in different kinds of rituals in both a large cathedral and a small parish church. Some of the conclusions challenge interpretations of these experiences, which have been current since the Reformation. In addition, some consideration is given to the implications of understanding past liturgy for present-day worship.

Sally Harper is senior lecturer in the School of Music at Bangor University, Wales, and an associate chaplain of Bangor Cathedral. She has written widely on music and culture in medieval and early modern Wales, and on medieval liturgy. P.S. Barnwell is Fellow in the Historic Environment at Kellogg College, University of Oxford, UK. His research interests include the relationships between theology, liturgy, lay devotion, and the evolution of the form of the English medieval parochial church. Magnus Williamson is senior lecturer at Newcastle University. His research focuses on the sources and contexts of Tudor polyphony, organs, improvisation, and critical editing. He is currently General Editor of the British Academy series Early English Church Music. John Harper, though not one of the editors, is the principal author, and has been the fons et origo of the practice-led research project from which this book flows and which exemplifies his career as a liturgical musician, scholar, teacher and administrator. Through honorary association with the University of Birmingham, UK, and emeritus associations with Bangor University and The Royal School of Church Music, he continues his work in sacred music studies and liturgy. He is perhaps most widely known for his useful guide The Forms and Orders of Western Liturgy from the Tenth to the Eighteenth Century.