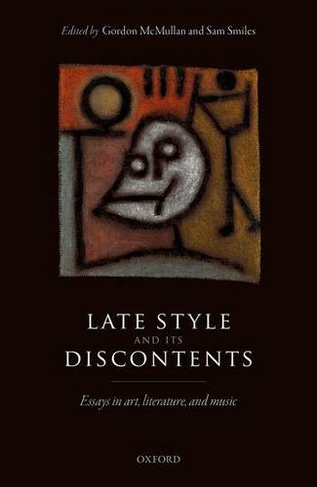 Late Style and its Discontents: Essays in art, literature, and music

'Late style' is a critical term routinely deployed to characterise the work of selected authors, composers, and creative artists as they enter their last phase of production-often, but not only, in old age. Taken at face value, this terminology merely points to a chronological division in the artist's oeuvre, 'late' being the antonym of 'early' or the third term in the triad 'early-middle-late'. However, almost from its inception, the idea of late style or late work has been freighted with aesthetic associations and expectations that promote it as a special episode in the artist's creative life. Late style is often characterised as the imaginative response made by exceptional talents to the imminence of their death. In their confrontation with death creative artists, critics claim, produce work that is by turns a determination to continue while strength remains, a summation of their life's work and a radical vision of the essence of their craft. And because this creative phenomenon is understood as primarily an existential response to a common fate, so late style is understood as something that transcends the particularities of place, time and medium. Critics seeking to understand late work regularly invoke the examples of Titian, Goethe, and Beethoven as exemplars of what constitutes late work, proposing that something unites the late style of authors, composers, and creative artists who otherwise would not be bracketed together and that lateness per se is a special order of creative work. The essays in this collection resist this position. Ranging across literature, the visual arts, music, and scientific work, the material assembled here looks closely at the material, biographical and other contexts in which the work was produced and seeks both to question the assumptions surrounding late style and to prompt a more critical understanding of the last works of writers, artists and composers. Numerous black-and-white halftones

Gordon McMullan is Professor of English at King's College London and Director of the London Shakespeare Centre. He is a critic and an editor with a focus on Shakespeare and early modern drama. He is a general editor of the Arden Early Modern Drama series and author of Shakespeare and the Idea of Late Writing: Authorship in the Proximity of Death.Sam Smiles is an art historian at the University of Exeter. His research is focused primarily on British art and especially on the career of JMW Turner. He is curating a major exhibition at Tate Britain on Turner's last works and completing a book on the same subject.