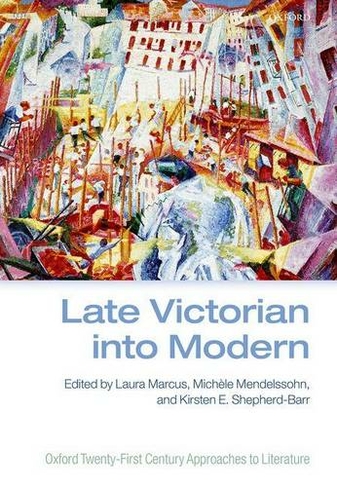 The original essays in Oxford Twenty-First Century Approaches to Literature mean to provoke rather than reassure, to challenge rather than codify. Instead of summarizing existing knowledge scholars working in the field aim at opening fresh discussion; instead of emphasizing settled consensus they direct their readers to areas of enlivened and unresolved debate. This volume opens up, in new and innovative ways, a range of dimensions, some familiar and some more obscure, of late Victorian and modern literature and culture, primarily in British contexts. Late Victorian into Modern emphasises the in-between: the gradual changeover from one period to the next. The volume examines shared developments, points out continuities rather than ruptures, and explores and exploits an understanding of the late nineteenth to the early twentieth centuries as a cultural moment in which new knowledges were forming with particular speed and intensity. The organising principle of this book is to retain a key focus on literary texts, broadly understood to include familiar categories of genre as well as extra-textual elements such as press and publishing history, performance events and visual culture, while remaining keenly attentive to the inter-relations between text and context in the period. Individual chapters explore such topics as Celticism, the New Woman, popular fictions, literatures of empire, aestheticism, periodical culture, political formations, avant-garde poetics, and theatricality. 14 black and white illustrations

Laura Marcus is Goldsmiths' Professor of English at the University of Oxford, where she is a Professorial Fellow of New College. Her book publications include Auto/biographical Discourses: Theory, Criticism, Practice (1994), Virginia Woolf: Writers and their Work (1997/2004), The Tenth Muse: Writing about Cinema in the Modernist Period (2007; awarded the 2008 James Russell Lowell Prize of the Modern Language Association), Dreams ofModernity: Psychoanalysis, Literature, Cinema (2015), and, as co-editor, The Cambridge History of Twentieth-Century English Literature (2004). Her current research project includes a study of the concept of 'rhythm' in the late nineteenth and early twentieth centuries, in a range of disciplinary contexts.Michele Mendelssohn is Associate Professor at University of Oxford and Deputy Director of the Rothermere American Institute. She is the author of Henry James, Oscar Wilde, and Aesthetic Culture (2007) and co-editor of Alan Hollinghurst: Writing Under the Influence (2016).Kirsten Shepherd-Barr is Professor of English and Theatre Studies at the University of Oxford and a Fellow of St. Catherine's College. Her books include Science on Stage: From Doctor Faustus to Copenhagen (2006), Theatre and Evolution from Ibsen to Beckett (2015), and Modern Drama: A Very Short Introduction (2016).