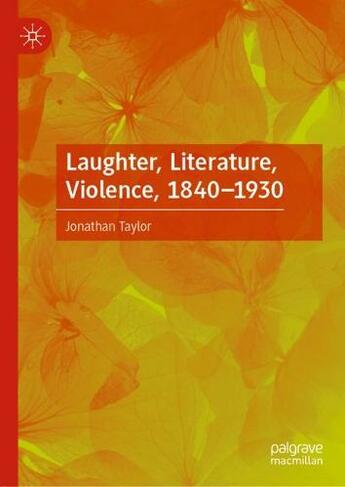 Laughter, Literature, Violence, 1840-1930 investigates the strange, complex, even paradoxical relationship between laughter, on the one hand, and violence, war, horror, death, on the other. It does so in relation to philosophy, politics, and key nineteenth- and twentieth-century literary texts, by Edgar Allan Poe, Edmund Gosse, Wyndham Lewis and Katherine Mansfield - texts which explore the far reaches of Schadenfreude, and so-called 'superiority theories' of laughter, pushing these theories to breaking point. In these literary texts, the violent superiority often ascribed to laughter is seen as radically unstable, co-existing with its opposite: an anarchic sense of equality. Laughter, humour and comedy are slippery, duplicitous, ambivalent, self-contradictory hybrids, fusing apparently discordant elements. Now and then, though, literary and philosophical texts also dream of a different kind of laughter, one which reaches beyond its alloys - a transcendent, 'perfect' laughter which exists only in and for itself. 1 Illustrations, black and white; X, 258 p. 1 illus.

Jonathan Taylor is Associate Professor at the University of Leicester, where he directs the MA in Creative Writing. He is an author, editor and lecturer, whose writing encompasses both critical and creative forms. His previous monographs are Mastery and Slavery in Victorian Writing (Palgrave Macmillan, 2003), and Science and Omniscience in Nineteenth-Century Literature (2007). His creative work includes a memoir, Take Me Home (2007), the novel Melissa (2015), and the poetry collection Cassandra Complex (2018).