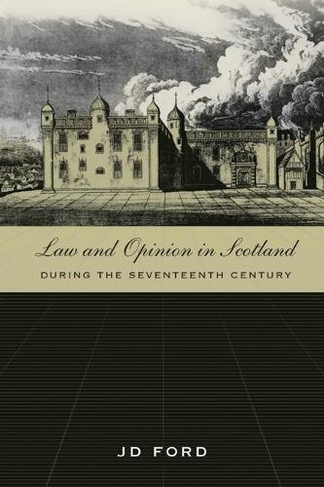 Law and Opinion in Scotland During the Seventeenth Century

In Britain at least, changes in the law are expected to be made by the enactment of statutes or the decision of cases by senior judges. Lawyers express opinions about the law but do not expect their opinions to form part of the law. It was not always so. This book explores the relationship between the opinions expressed by lawyers and the development of the law of Scotland in the century preceding the parliamentary union with England in 1707, when it was decided that the private law of Scotland was sufficiently distinctive and coherent to be worthy of preservation. Credit for this surprising decision, which has resulted in the survival of two separate legal systems in Britain, has often been given to the first Viscount Stair, whose Institutions of the Law of Scotland had appeared in a revised edition in 1693. The present book places Stair's treatise in historical context and asks whether it could have been his intention in writing to express the type of authoritative opinions that could have been used to consolidate the emerging law, and whether he could have been motivated in writing by a desire to clarify the relationship between the laws of Scotland and England. In doing so the book provides a fresh account of the literature and practice of Scots law in its formative period and at the same time sheds light on the background to the 1707 union. It will be of interest to legal historians and Scots lawyers, but it should also be accessible to lay readers who wish to know more about the law and legal history of Scotland

J.D. Ford is a Fellow of Gonville and Caius College, Cambridge.