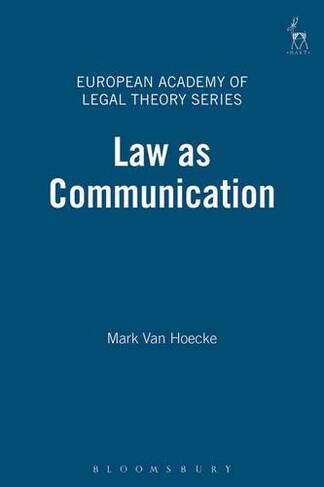 By Mark Van Hoecke (Author)
Hardback
https://www.whsmith.co.uk/products/law-as-communication-european-academy-of-legal-theory-series-4/mark-van-hoecke/hardback/9781841133416-01-000.html N/A
GBP
Availability
Currently unavailable. We don't know when or if this item will be back in stock
Free Saver Delivery on orders over £25
Details
FREE SHIPPING over £25 for Saver Delivery
Share

Human interaction and communication are not only regulated by law,but such communication plays an increasing role in the making and legitimation of law, involving various kinds of participants in the communication process. The precise nature of these communications depends on the legal actors involved -- for instance legislators, judges, legal scholars, and the media -- and on the situations where they arise - for instance at the national and supra-national level and within or between State law and non-State law. The author argues that our conception of legal system, of democracy, of the legitimation of law and of the respective role of judges, legislators and legal scholars should be based on a pluralist and communicative approach, rather than on a monolithic and hierarchical one. This book analyses the main problems of jurisprudence from such a communicative perspective black & white illustrations

Mark Van Hoecke is Professor of Law and Jurisprudence at the Katholieke Universiteit Brussel and co-director of the European Academy of Legal Theory in Brussels.