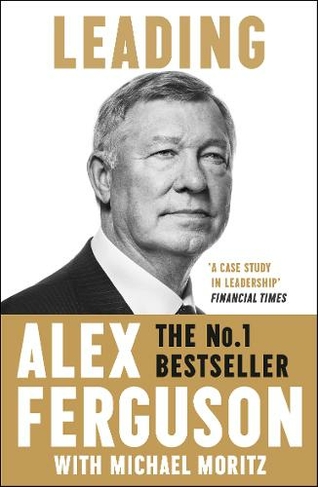 Leading: Lessons in leadership from the legendary Manchester United manager

'One of the World's all-time great leaders' Professor Anita Elberse, Harvard Business School What does it take to lead a team to world-class success over a sustained period of time? Sir Alex Ferguson is one of the few leaders who truly knows. In his 38 years in management, Sir Alex won an astonishing 49 trophies and helped grow Manchester United into one of the biggest commercial brands in the world. In this inspirational and straight-talking book, Sir Alex reveals the secrets behind his record-breaking career. LEADING is structured around the key skills that Sir Alex values most highly. It includes subjects we immediately associate with his managerial style: Discipline, Control, Teamwork and Motivation. But it also addresses subjects that are less obvious but no less important when seeking success: Delegation, Data Analysis and Dealing with Failure. Written with the investor Sir Michael Moritz, a longstanding friend of Sir Alex, LEADING is packed with insight, wisdom, humour and honesty. The individual stories inevitably concern themselves with football, and the phenomenal success that came along the way, but the lessons can be applied by anyone. Whether you run a business, teach in a classroom, or work in a small team, LEADING will help you become a better leader.

Sir Alex FergusonSir Alex Ferguson was born in 1941 in Govan, Scotland. A goal-scoring centre-forward, he was later transferred to Rangers, the club he supported from boyhood, for a Scottish record fee of GBP65,000.Entering management in 1974, he served East Stirlingshire and St Mirren before guiding Aberdeen to victory in the 1982-83 Cup Winners' Cup. Arriving at Manchester United in 1986, he brought them 38 trophies, including the Club World Cup, two Champions Leagues, 13 Premier Leagues and five FA Cups. His overall haul of 49 trophies made him the most successful British manager of all time.Knighted in 1999, Sir Alex announced his retirement in 2013, when United were again crowned Premier League champions. At the age of 73, he continues to serve United as a director.In 2012 Harvard Business School created a case-study based on Sir Alex's managerial career: Sir Alex Ferguson: Managing Manchester United, and Sir Alex is now a Fellow to the Executive Education Program at Harvard. Sir Alex has published three previous books, the most recent of which, Alex Ferguson: My Autobiography became the fastest selling Non-Fiction hardback since records began, when it was published in 2013.Sir Michael MoritzSir Michael Moritz was born in Cardiff, studied Modern History at Oxford and began his career as a journalist at Time magazine in the US in the late 1970s. It was during this period that he met the young Steve Jobs and began work on the first book about Apple, The Little Kingdom: the Private Story of Apple Computer, which was published in 1984 and has become an industry classic. Moritz co-wrote a second business book, Going for Broke: The Chrysler Story, before changing career in 1986 and joining Sequoia Capital, based in the heart of Silicon Valley, California.Sequoia Capital's close alliances with young founders have been transformed into companies now worth nearly $1.5 trillion - the most of any private, investment firm in the world. These include the first investments in companies such as Apple and Cisco and, more recently, YouTube, AirBnB, Dropbox and WhatsApp. Michael Moritz has been a member of the Board of Directors of a variety of companies including Google, Yahoo!, PayPal and LinkedIn. His work at Sequoia helped him achieve the number one listing in Forbes "Midas List" of the top dealmakers in the technology industry in 2006-7, and a place on the 2007 "Time 100 list".In 2009, almost thirty years after it was first published, Moritz revised and expanded his book on Apple in The Return to the Little Kingdom. In 2012 he became chairman of Sequoia Capital. In 2013 he was appointed KBE in the Queen's Birthday Honours list for his services to promoting British economy and his family's philanthropic work includes the formation of Europe's largest scholarship programme for low income university students. The son of refugees from Nazi Germany, he lives in San Francisco with his wife, Harriet Heyman.