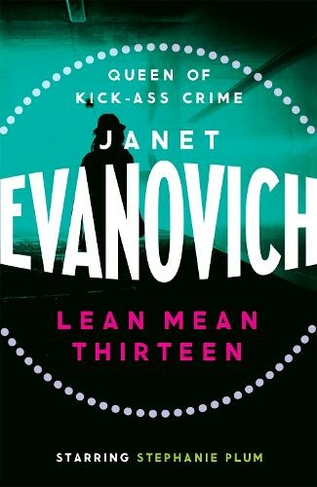 By Janet Evanovich (Author)
Paperback
https://www.whsmith.co.uk/products/lean-mean-thirteen-a-fastpaced-crime-novel-full-of-wit-adventure-and-m/janet-evanovich/paperback/9780755337590-12-000.html £8.19 rrp £9.99 Save £1.80 (18%)
GBP
Availability
Available / dispatched within 1 - 2 weeks
Free Delivery Available When You Spend £25 Or More
Details
Spend £25 On Products To Receive Free Standard Delivery To Your Home Or Free Next Working Day Click And Collect To Store

Stephanie's digging up a whole heap of bad news... New secrets, old flames and hidden agendas send bounty hunter Stephanie Plum on her most outrageous adventure yet in Lean Mean Thirteen. Janet Evanovich's Stephanie Plum series is not to be missed by fans of Sue Grafton and Lee Child. Raves for Evanovich's bestselling novels: 'Highly enjoyable... who can resist? (Chicago Tribune); 'Romantic and gripping' (Good Housekeeping); 'Plum is not just a smart private eye but a heroine with a sense of humour' (Daily Mail). Stephanie Plum is used to dealing with crimes in the neighbourhood, but she's not used to being accused of committing the crimes. Her no-good ex-husband, Dickie, has gone missing the day after Stephanie was seen having an argument with him, threatening bodily harm. Now Stephanie is suspect number one. Stephanie is going to have to find Dickie, and fast, to clear her name. Hot cop Joe Morelli can't tell her anything, and mentor Ranger is offering to help...for a price that doesn't involve money. What readers are saying about Lean Mean Thirteen: 'Fast paced and funny and the characters are getting better and better as we get to know them' 'Laughs a plenty and another great storyline' 'A fabulous book that has not only served to make me eager for the next, but given me hours of enjoyment in the meantime'