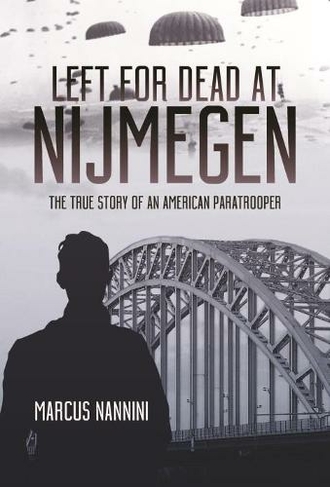 Left for Dead at Nijmegen: The True Story of an American Paratrooper in World War II

Left for Dead at Nijmegen recalls the larger-than-life experiences of an American paratrooper, Gene Metcalfe, who served in the 82nd Airborne during WWII. From his recruitment into the military at Camp Grant to his training with the 501st Paratroop Infantry Regiment at Camp Toccoa, it wasn't until D-Day itself that he first arrived in England to join the 508th PIR. Nannini records Gene's memories of being dropped during Operation Market Garden in Nijmegen, Holland. Gene was listed as KIA and left for dead by his patrol, who presumed the worst when they saw his injuries from a shell explosion. In the climax of the story, Gene is captured by German SS soldiers and, with absolutely no protection, found himself standing before a senior officer, whom Gene recognized as Heinrich Himmler himself, behind enemy lines in a 16th century castle. Gene's subsequent interrogation is fully recounted, from the questioning of his mission to the bizarre appearance of sausages, mustard, marmalade and bread for his "dinner." This would be his last proper meal for eight months. The rest of his story is equally gripping, as he became a POW held outside Munich, being moved between various camps ridden with disease and a severely undernourished population. Eventually, after making an escape attempt and being captured within sight of the snow-capped Swiss mountains, his camp was liberated by American troops in April 1945. Gene's story is both remarkable for his highly unusual encounter, and his subsequent experiences. 60 black and white photographs and illustrations

Marcus Nannini was a reporter during his undergraduate years and worked as a research assistant for journalism professor and published author Richard Stocks Carlson. Nannini is a history buff with a particular interest in WWII. He has researched the background of this story and carried out many interviews over several years with Gene Metcalfe, the subject of this book. Nannini has also written a highly praised work of historical fiction, about a crew member of a Japanese midget submarine in the aftermath of Pearl Harbour, Chameleons: An Untold World War II Story (2017).