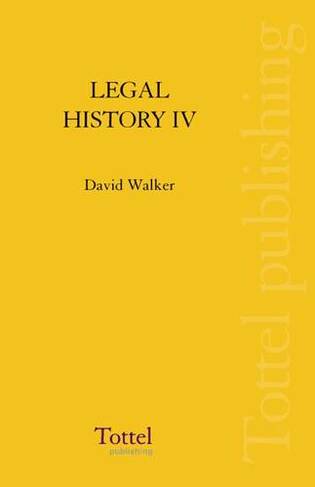 By David M. Walker (Author)
Hardback
https://www.whsmith.co.uk/products/legal-history-of-scotland-v-4-the-seventeenth-century/david-m-walker/hardback/9781845926403-01-000.html £165.00
GBP
Availability
Currently unavailable. We don't know when or if this item will be back in stock
With Free Saver Delivery
Details
FREE SHIPPING over £20 for Saver Delivery
Share

Professor Walker's Legal History of Scotland will be published in seven volumes. It is the only attempt yet made to write a chronological narrative account of the development of the Scottish legal system from early times on a substantial scale, with extensive reference to original sources. That development is wholly different from that of the English legal system. Attention is given at all stages to sources and legal literature, the influences of other legal systems, the courts and procedure, the lawyers, the roles of Parliament and the Privy Council, and to public, criminal and private law, both substantive and procedural.Volume IV deals with the years between 1603, when the Scots lost their resident king, and 1707, when they lost their separate parliament. Those years saw the establishment of the High Court of Justiciary, the building of the Parliament House, the development of legal literature in the works of Craig, Stair and Mackenzie, and, particularly after the Restoration, considerable evolution of private law.