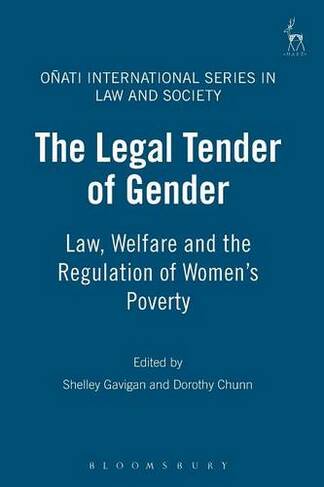 Legal Tender of Gender Law, Welfare, and the Regulation of Women's Poverty

Extensive welfare, law and policy reforms characterised the making and unmaking of Keynesian states in the twentieth century. This collection highlights the gendered nature of these regulatory shifts and, specifically, the roles played by women as reformers, welfare workers and welfare recipients, in the development of welfare states historically. The contributors are leading feminist socio-legal scholars from a range of disciplines in Canada, the United States and Israel. Collectively, their analyses of women, law and poverty speak to long-standing and ongoing feminist concerns: the importance of historically informed research, the relevance of women's agency and resistance to the experience of inequality and injustice, the specificity of the experience of poor women and poor mothers, the implications of changes to social policy, and the possibilities for social change. Such analyses are particularly timely as the devastation of neo-liberalism becomes increasingly obvious. The current world crisis of capitalism is a defining moment for liberal states - a global catastrophe that concomitantly creates a window of opportunity for critical scholars and activists to reframe debates about social welfare, work, and equality, and to reinsert the discourse of social justice into the public consciousness and political agendae of liberal democracies. ill

Shelley AM Gavigan, BA, LLB (Sask.), MA (Toronto), LLM (Osgoode/York), SJD (Toronto), is Professor of Law at Osgoode Hall Law School in Toronto, Canada, and a member of the Bars of Saskatchewan and Ontario. Dorothy E Chunn, MA, PhD (Toronto), is Professor of Sociology and Co-Director of the Feminist Institute for Studies on Law and Society at Simon Fraser University. She is co-editor (with Susan B Boyd & Hester Lessard) of Reaction and Resistance: Feminism, Law, and Social Change (UBC Press, 2007).]