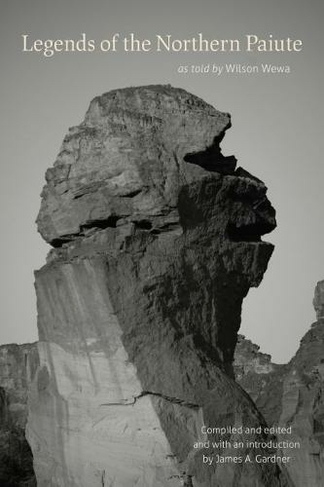 Legends of the Northern Paiute: as told by Wilson Wewa

Legends of the Northern Paiutes shares and preserves 21 original and previously unpublished Northern Paiute legends, as told by Wilson Wewa, a spiritual leader and oral historian of the Warm Springs Paiutes. These legends were originally told around the fires of Paiute camps and villages during the "story-telling season" of winter in the Great Basin of the American West. They were shared with Paiute communities as a way to pass on tribal visions of the "animal people" and the "human people," their origins and values, their spiritual and natural environment, and their culture and daily lives. The legends in this volume were recorded, transcribed, reviewed, and edited by Wilson Wewa and James Gardner. Each legend was recorded, then read and edited out loud, to respect the creativity, warmth, and flow of Paiute storytelling. The stories selected for inclusion include familiar characters from native legends, such as the trickster Coyote, as well as intriguing creations unique to the Northern Paiutes, such as the creature embodied in the Smith Rock pinnacle, now known as "Monkey Face," but known to the Paiutes in Central Oregon as Nuwuzoho the cannibal. Wewa's apprenticeship to Northern Paiute culture began when he was 14 years old. These legends were passed on to him by his Grandmother and other tribal elders. They are now made available to future generations of tribal members, and to students, scholars, and readers interested in Wewa's fresh and authentic voice. These legends are best read and appreciated as they were told - out loud, shared with others, and delivered with all of the verve, cadence, creativity, and humor of original Paiute storytellers on those clear, cold winter nights in the high desert. black & white line drawings, Recommended reading

Wilson Wewa, a Northern Paiute/Palouse is well known throughout the northwest plateau and the Great Basin as a spiritual leader and keeper of traditional culture. He is a frequent speaker on Great Basin history and culture who has presented at Archaeology Days at Smith Rock State Park in Oregon, the Grant County Public Utility District in Washington State, the University of Oregon, and the College of William and Mary in Virginia. James A. Gardner graduated from Harvard College in 1965 and Yale Law School in 1968. He was president of Lewis and Clark College in Portland, Oregon, from 1981-1989, and has since been President of Gardner Associates, creating and developing historic conservation Ranches in Central Oregon. He has been a Visiting Scholar at the University of Oregon from 2013 to present and frequently writes about Native American and Settlement history in Oregon.