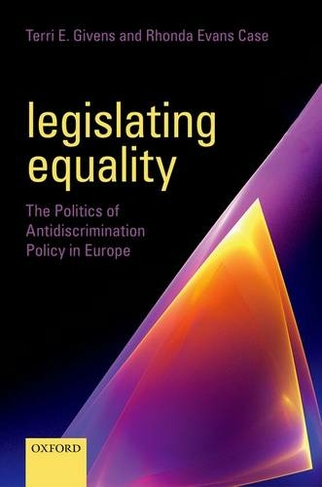 Legislating Equality The Politics of Antidiscrimination Policy in Europe

The development of antidiscrimination policy in Europe closely mirrored European Union deepening in the 1990s, but its roots lie in developments during the 1980s. Actors in the European Parliament saw a political opening for action with the rise of the radical right in places like France and Germany. In the 1980s and early 1990s, racist acts of violence and the stunning success of radical right political parties across Europe catapulted the issues of immigration, xenophobia, fascism, and racism to the forefront. The European Parliament was only beginning to take on a more important role in the supranational structures that were under construction during the 1980s, but it would play a key role in the development of an anti-racism agenda and what would ultimately become racial antidiscrimination policy for the European Union. Legislating Equality begins by examining the evolving discourses around racism in Europe from the mid-1980s through the late 1990s. The authors then link these discourses and country level starting points to the political and social factors which influenced the development of antidiscrimination policy. Examining the role of the European Parliament, Commission, and key societal actors in the passage of the Racial Equality Directive in 2000. It then goes on to examine the transposition of the EU directives into national law and the implementation of antidiscrimination policy. Legislating Equality argues that these processes were impacted by the slow-down in European integration in the early 2000s as well as political pressure from more conservative governments than had initially passed the legislation at the EU level.

Terri E. Givens' research interests include immigration politics in Europe and the U.S., immigrant integration, and the politics of race in Europe. She has received support for her research from the Fulbright Scholar Program, the German Marshall Fund, and the Woodrow Wilson International Center for Scholars. She is an Associate Professor in the Government Department at the University of Texas at Austin.Rhonda Evans Case's research interests include law and society, constitutional law and politics, and human rights. She is Assistant Professor, Department of Political Science East Carolina University and Adjunct Associate Professor, University of Texas at Austin.