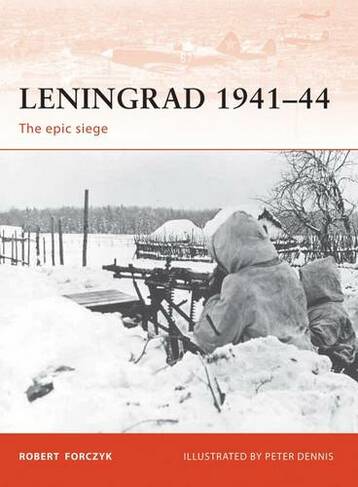 Hitler's protracted siege of Leningrad resulted in one of the most brutal campaigns on the Eastern Front during World War II. The German Army Group North was able to isolate the city and its garrison for a period of 900 days, during which an estimated 1.5 million Soviets died from combat, disease and starvation. For over two years, German forces pounded the city with artillery and air assaults while the Soviets made repeated efforts on the frozen swamplands of the Volkhov Front to break through. Finally, in January 1944, the Soviets were able to break Army Group North's front and relieve Leningrad. While most histories of the siege of Leningrad focus on the plight of the starving civil population, this refreshing title instead examines the strength of the garrison's defenses - which ultimately prevented the Germans from capturing the city - and the growing sophistication of Soviet offensive tactics. Dr Forczyk also provides an assessment of how weather and terrain factors shaped the campaign in this superb addition to the history of the Eastern Front. Illustrations (chiefly col.)

Dr. Robert A. Forczyk has a PhD in International Relations and National Security from the University of Maryland and a strong background in European and Asian military history. He is currently a lieutenant colonel in the US Army Reserves and has served 18 years as an armor officer in the US 2nd and 4th Infantry Divisions and as an intelligence officer in the 29th Infantry Division (Light). The author lives in Laurel, Maryland.