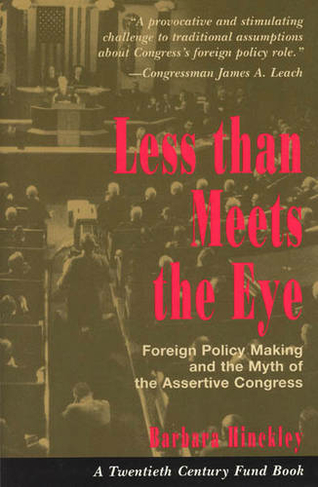 Less Than Meets the Eye Foreign Policy Making and the Myth of the Assertive Congress 2nd ed.

Focusing on cases involving major military action, foreign aid authorization and key controversial votes in both legislative branches, Hinckley shows that - appearances to the contrary - Congress more often than not votes with the President and has done so for the last few decades. Despite occasional flurries of activity on carefully chosen symbolic issues, most foreign policy issues never even make the Congressional agenda. Those that do are often dispatched with demands for reports that are left unread or with tough restrictions having built-in "escape provisions". Both branches, Hinckley argues, encourage this image of conflict and profit from the symbolic political capital it produces. This process comes to light in her analysis of aid to Nicaragua. What Hinckley reveals is sharply at odds with conventional wisdom and unflattering to both the executive and the legislative branches of government. More than a critical reassessment, this book also proposes reforms that might result in real congressional participation in the making of foreign policy. With its insight into how the US system of checks and balances works - and doesn't - this book takes a first step toward making the peoples' representatives accountable for crucial American interests in foreign matters. 13 tables