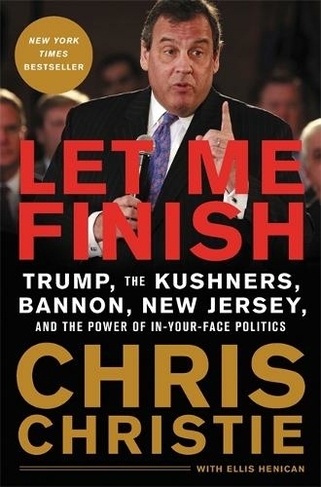 Let Me Finish: Trump, the Kushners, Bannon, New Jersey, and the Power of In-Your-Face Politics

By Chris Christie (Author)
Paperback
https://www.whsmith.co.uk/products/let-me-finish-trump-the-kushners-bannon-new-jersey-and-the-power-of-inyourface-politics/chris-christie/paperback/9780316421812-12-000.html £11.99 rrp £14.99 Save £3.00 (20%)
GBP
Availability
In Stock
Free Delivery Available When You Spend £25 Or More
Details
Spend £25 on eligible products to receive free standard delivery to home or free next working day click and collect to store
Share

The famously candid two-term governor of New Jersey, Chris Christie was the first major official to endorse Trump for president. Christie quickly became one of Trump's most trusted advisers, tapped with running Trump's transition team and nearly being named vice president. Within days of Trump's surprise victory, however, the president-elect booted Christie from the transition team, citing the Bridgegate scandal. In Let Me Finish, Christie sets the record straight about his tenure as a corruption-fighting prosecutor and a Republican running a Democratic state, as well as what really went down inside Trump Tower. Christie will take readers into the ego-driven power struggles among the top advisers competing for Trump's mercurial attention, figures like Steve Bannon, Corey Lewandowksi, Reince Priebus, Kellyanne Conway, Paul Manafort and Jared Kushner, Trump's son-in-law who never forgot that Christie was the prosecutor who put his wealthy father behind bars. Packed with news-making revelations and told with an entertaining bluntness that few politicians can match, Christie's memoir will be an essential lesson in Trump-era realpolitik.

Chris Christie is an American politician, former United States Attorney, and political commentator who served as the 55th Governor of New Jersey from 2010 to 2018. During his tenure, he chaired the Republican Governors Association and President Trump's Opioid and Drug Abuse Commission. Christie became an ABC News contributor in 2018 after leaving office.