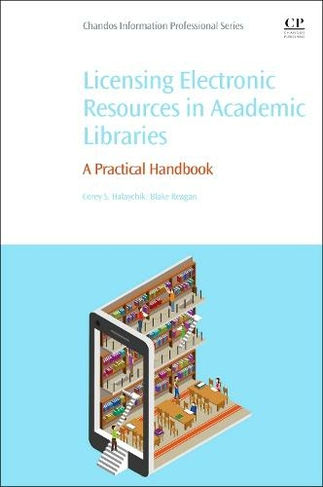 Also available on eBook for £64.31. Click here to purchase from Rakuten Kobo

Licensing Electronic Resources in Academic Libraries: A Practical Handbook provides librarians charged with reviewing, negotiating, and processing licenses with fundamental information that will ensure they not only understand the contents of a license, but are also able to successfully complete the licensing life cycle from start to finish. The contents of the monograph includes basic concepts, real word examples, and tips for negotiation.

Corey S. Halaychik is an award winning librarian who has held leadership positions in the hospitality, map publishing, and library industries. He has worked across many library departments, including reference, access services, and electronic resource units in both public and academic settings where his work and research have focused on improving efficiency, teamwork, and leadership skill development. He previously served as Chair of the Department of Library Services at Three Rivers College in Poplar Bluff, Missouri, and his current role is Assistant Professor and Head, Acquisitions and Continuing Resources for The University of Tennessee Knoxville. Corey is also co-founder and co-director of The Collective (thelibrarycollective.org), a professional library gathering founded in 2015 and dedicated to reinventing the library conference landscape. He holds an MLIS from Florida State University and a MS in Leadership from Grand Canyon University. He's a Florida native but currently resides in Tennessee with his faithful sidekick, Jackson the Wonder Hound. Blake Reagan earned a B.A. and a J.D. from The University of Tennessee at Knoxville. He has an active TN law license (2007), and he has worked in higher education procurement since July 2008. He is currently the director of procurement services for The University of Tennessee. In 2015, Blake received the Young Procurement Professional Award from the National Association of Education Procurement.