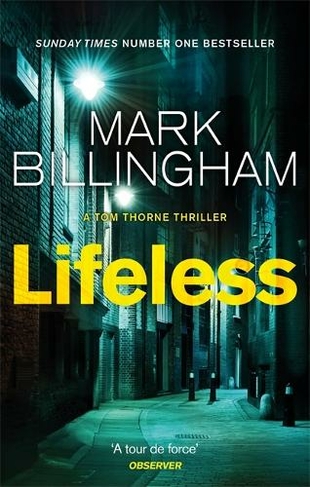 By Mark Billingham (Author)
Paperback
£7.37 rrp £8.99 Save £1.62 (18%)
GBP
Availability
In Stock
Free Delivery Available When You Spend £15 Or More
Details
Spend £15 On Products To Receive Free Standard Delivery To Your Home

The fifth book in the Tom Thorne series, from bestselling author Mark Billingham. A SERIES OF KILLINGS Three men, sleeping rough on London's mean streets, have been found brutally murdered - each victim kicked to death and found with a GBP20 note pinned to his chest. But were they killed at random, or were they targeted for a reason? A DEADLY MISSION Tom Thorne is posted to the same streets - working undercover, disguised as a homeless man. In a harsh and harrowing underworld, Thorne discovers the horrifying link between the homeless victims and the perpetrators of a fifteen-year-old atrocity. A RUTHLESS ENEMY Those who know are keeping quiet. But the word on these streets is that the killer is a cop... __________ Read what everyone's saying about the heart-racing Tom Thorne series: 'Literary superstar' Mail on Sunday 'Ingenious' Guardian 'Ground-breaking' Sunday Times 'Mark Billingham gets better and better' Michael Connelly 'A cracking read . . . I couldn't put it down!' Shari Lapena 'A damn fine storyteller' Karin Slaughter 'Twisted and twisty' Linwood Barclay 'One of the most consistently entertaining, insightful crime writers working today' Gillian Flynn 'The next superstar detective is already with us. Don't miss him' Lee Child