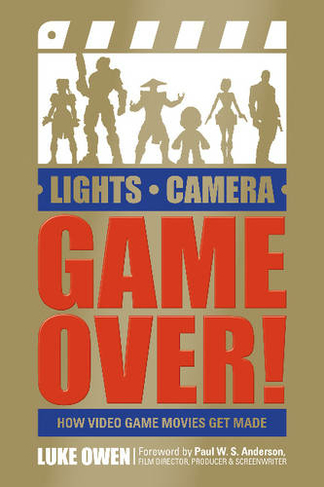 Lights, Camera, Game Over!: How Video Game Movies Get Made

Since 1993, Hollywood has been rendering popular video games on the silver screen, mainly to critical derision and box office failure. While a few have succeeded, many have been hailed as the "worst movie ever" and left gamers asking: how did that get made? Super Mario fans expecting plumbers jumping on Goombas got an inter-dimensional battle between humans and evolved dinosaurs. Players expecting to see Ryu, Ken, and the rest of the World Warriors compete in the Street Fighter Tournament instead got a live-action GI Joe. This in-depth and entertaining work recounts the production histories of many of these movies, revealing the sometimes inspired and convoluted path Hollywood took to turn pixels into living flesh, with insights from more than 40 industry insiders, including film directors Paul W. S. Anderson (Resident Evil), Simon West (Tomb Raider), and Steven de Souza (Street Fighter).

Luke Owen is a writer, editor, and podcaster who has been playing video games and watching movies his whole life. He is the deputy editor of Flickering Myth, and he also co-hosts the weekly Flickering Myth Podcast and Scooperhero News.