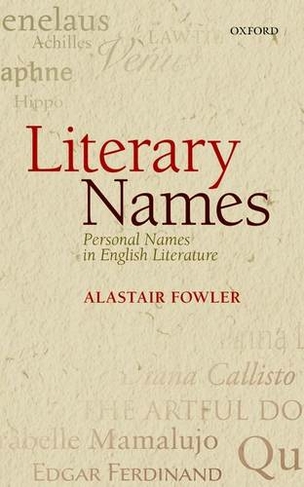 Why do authors use pseudonyms and pen-names, or ingeniously hide names in their work with acrostics and anagrams? How has the range of permissible given names changed and how is this reflected in literature? Why do some characters remain mysteriously nameless? In this rich and learned book, Alastair Fowler explores the use of names in literature of all periods - primarily English but also Latin, Greek, French, and Italian - casting an unusual and rewarding light on the work of literature itself. He traces the history of names through Homer, Spenser, Shakespeare, Milton, Thackeray, Dickens, Joyce, and Nabokov, showing how names often turn out to be the thematic focus. Fowler shows that the associations of names, at first limited, become increasingly salient and sophisticated as literature itself develops.

Alastair Fowler is Regius Professor Emeritus of Edinburgh University, and was previously Professor of English at the University of Virginia. For many years he divided his time between the United States and Britain, where he now lives. His publications include an annotated edition of Paradise Lost (1968); Kinds of Literature (1982); and Renaissance Realism (2003). His interest in literary names goes back to his Witter Byner lecture atHarvard in 1974.