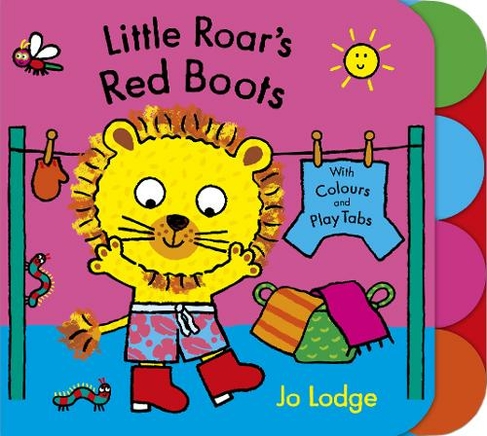 By Jo Lodge (Author)
Novelty / Children's
https://www.whsmith.co.uk/products/little-roars-red-boots-board-book/jo-lodge/novelty--childrens/9781444904826-12-000.html £5.39 rrp £5.99 Save £0.60 (10%)
GBP
Availability
In Stock
Free Delivery Available When You Spend £15 Or More
Details
Spend £15 On Eligible Products To Receive Free Standard Delivery To You Home Or Free Next Working Day Click And Collect To Store
Share

An adorable new character from the creator of the international hit Mr Croc, these bright and bold Little Roar storybooks cover early-learning themes such as counting, colours and shapes. Join Little Roar and his friends in this interactive story about colours that's perfect for preschool children. Little Roar loves his red boots but he's lost them. His best friends Gigi, Monty and Posy all try to help with the search but they keep finding other colourful clothes instead. Maybe Little Roar should wear them all! Toddlers will love lifting the chunky tabs to reveal colours and clothes and sliding out the final page for a special surprise! 'Brilliantly interactive books.' Wendy Cooling, Bookstart Full colour throughout EU Toy Safety Directive - Carries 'CE' logo EU Toy Safety Directive - Carries minimum age warning

Jo Lodge is an illustrator and paper engineer and was greatly influenced by her artistic parents - her mother, Maureen Roffey, an illustrator, and her father Bernard Lodge, a graphic designer. Her first books were published by Rod Campbell and her boldly coloured animal characters have starred in a a wide range of books. Jo was nominated for the Sainsbury's Baby Book Award in 2001, was finalist for the Sheffield Baby Book Award in 2007 and was shortlisted for the Booktrust Early years awards in 2010. She is perhaps best known for her Mr Croc books which have been a hit around the the world with sales exceeding 1 million copies. She lives in West Sussex with her husband and two sons. To find out more about Jo and her books, visit www.jolodge.com