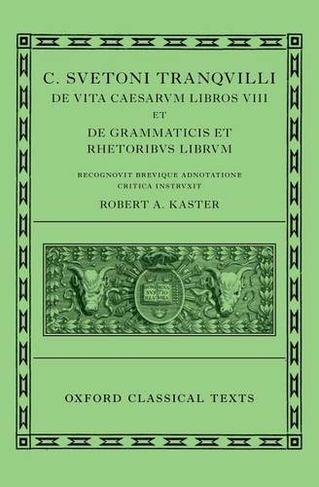 Oxford Classical Texts, also known as Scriptorum Classicorum Bibliotheca Oxoniensis, provide authoritative, clear, and reliable editions of ancient texts. Suetonius' Lives of the Caesars-the collected biographies of the Roman Empire's first leaders-is an indispensable source for our understanding of the first century of the Roman Empire and is, at the same time, one of the main sources (with Plutarch) of the tradition of biographical writing in the West. This volume provides the first new critical edition of the Latin text to appear in over a century, and has been rigorously edited to the highest standards of scholarship. The Latin text is accompanied by a critical apparatus at the foot of the page which provides concise information on manuscript and textual variants. It is also the first edition ever to base itself on a comprehensive and accurate analysis of the medieval manuscript tradition (ninth to thirteenth centuries) on which the text is based. An extensive English preface-featuring illustrative stemmata-is included, as well as a detailed apparatus testium. It also features an updated version of the editor's original 1995 Oxford University Press edition of De grammaticis et rhetoribus, a collection of brief biographies of ancient Roman teachers of grammar and rhetoric (first century BCE-first century CE) that is a crucial source for the history of ancient education. This Oxford Classical Text is accompanied by a companion volume, Studies on the Text of Suetonius' De uita Caesarum, which provides a detailed insight into the research and textual analysis underlying this critical edition.

Robert A. Kaster is Professor of Classics and Kennedy Foundation Professor of Latin Language and Literature at Princeton University.