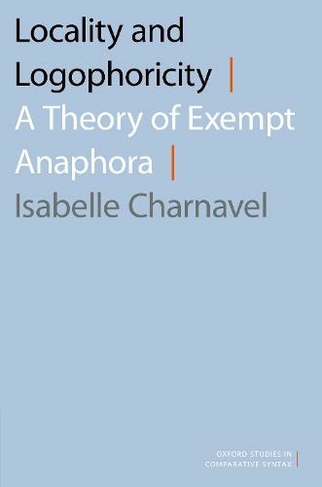 Locality and Logophoricity: A Theory of Exempt Anaphora (Oxford Studies in Comparative Syntax)

By Isabelle Charnavel (Author)
Paperback
https://www.whsmith.co.uk/products/locality-and-logophoricity-a-theory-of-exempt-anaphora-oxford-studies-in-comparative-syntax/isabelle-charnavel/paperback/9780190902094-12-000.html £39.47 rrp £41.99 Save £2.52 (6%)
GBP
Availability
In Stock
With Free Standard Delivery To Your Home Or Store
Details
Spend £15 On Eligible Products To Recieve Free Standard Delivery To You Home Or Free Next Working Day Click And Collect To Store
Share

Locality and Logophoricity investigates what the distribution of pronominal expressions in various languages can tell us about the structure of the human language faculty. The exploration of this question in the past fifty years has led to the development of a general theory of referential dependency, namely Binding Theory. This book focuses on Condition A of this theory, which concerns referentially dependent expressions such as English herself, French elle-meme or Mandarin ziji. Specifically, it tackles an issue of apparent ambiguity presented by many of these reflexives across languages: in a large number of unrelated languages, we observe that the same reflexive form must obey either syntactic constraints or discourse constraints related to perspective. The specific aim of the book is to describe and explain this widespread dual behavior of reflexives. A detailed empirical investigation based mainly on systematically collected French, English, Icelandic, Mandarin, and Korean data leads the author to propose a unified solution to this issue. This proposal has consequences both for Binding Theory and for the theory of logophoricity, which addresses the impact of perspective on linguistic systems. 1 illus.

Isabelle Charnavel is Associate Professor of Linguistics at Harvard University. Her primary research interests focus on the interface between theoretical syntax and semantics.