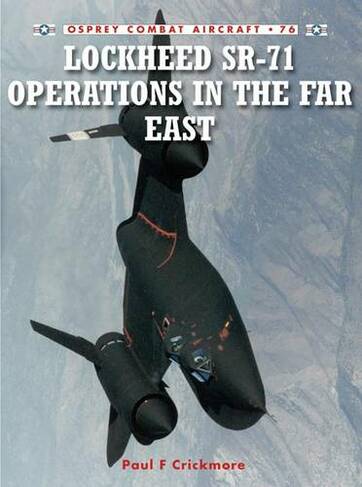 Lockheed Sr-71 Operations in the Far East: (Combat Aircraft No. 76)

Even before the first operational flight of the U-2 spy plane, aircraft designers began work on the type's replacement. The result was the SR-71. First deployed on March 9, 1968, this tri-sonic 'hotrod' flew its first operational sortie over North Vietnam just 12 days later. Thereafter, the SR-71 roamed freely, capturing photographic, radar and electronic intelligence. This book examines the impact this aircraft had, not only on North Vietnam but during the Cold War as a whole, gathering information about the Soviet nuclear submarine fleet based in Vladivostok as well as the port's defenses, monitoring the actions of North Korea and flying four 11-hour, non-stop sorties into the Persian Gulf during the Iran-Iraq War in the late 1980s. Illustrations

During his time as an air traffic controller at the London Air Traffic Control Center, Paul Crickmore gained a unique introduction into SR-71 operations from RAF Mildenhall, Suffolk. Teaming up with Osprey produced the first detailed book ever to be published on the subject. When additional information became available to him in 1990 following the initial shut down of SR-71 operations, Crickmore produced an even more detailed book, Lockheed SR-71 The Secret Missions Exposed - the standard reference work on the subject. The work was acclaimed by both the aviation press, Ben Rich (late president of the Skunk Works) and the crews that flew the SR-71. He is also the author of the first detailed book about the 117. The author lives in Suffolk, UK.