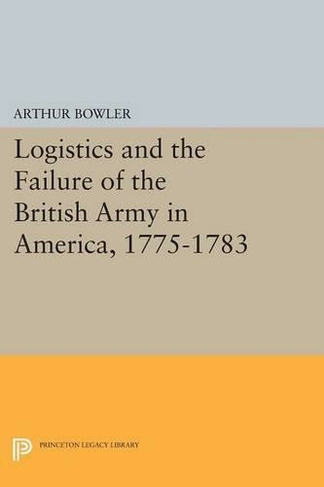 Logistics and the Failure of the British Army in America, 1775-1783: (Princeton Legacy Library)

The myth of the eighteenth-century British "war machine" persists, perplexing those who search for the reasons why Britain lost the Revolutionary War. In this book, R. Arthur Bowler argues that although recent and traditional studies have pointed out many problems of the British forces in America, they have failed to appreciate a major weakness--logistics. The author draws on the remarkably complete records of British government offices concerned with logistics during the Revolutionary War and army service departments such as commissary, quartermaster and barrack-master generals to provide a full account of the everyday life of the British army and an accurate record of how logistical and administrative problems in America affected the course of the war. His study makes it clear that the British army in America depended almost entirely on Britain for supplies, and that for six years inadequate and sometimes corrupt administration seriously affected the course of operations and the morale of the troops. An organization capable of supplying the army was not developed until 1781, too late to change the outcome of the war. Originally published in 1975. The Princeton Legacy Library uses the latest print-on-demand technology to again make available previously out-of-print books from the distinguished backlist of Princeton University Press. These editions preserve the original texts of these important books while presenting them in durable paperback and hardcover editions. The goal of the Princeton Legacy Library is to vastly increase access to the rich scholarly heritage found in the thousands of books published by Princeton University Press since its founding in 1905.