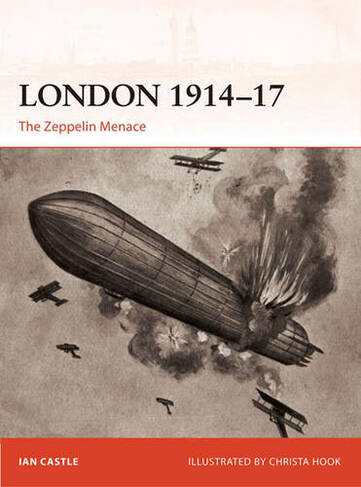 The first Zeppelin attack on London came in May 1915 - and with it came the birth of a new arena of warfare, the 'home front'. German airships attempted to raid London on 26 separate occasions between May 1915 and October 1917, but only reached the capital and bombed successfully on nine occasions, with much terror inflicted upon the capital's residents. The British organized counter-attacks against German bases on the Continent and developed a defensive system, while the Germans developed newer forms of high-altitude Zeppelins. This book tells the story of Germany's strategic air offensive against Britain, and how it came to be neutralized. Illustrations (some col.)

Ian Castle is an experienced historian who is a member of the Napoleonic Association, the Victorian Military Society and is a consultant for the Anglo Zulu War Historical Society. Ian began writing more than ten years ago and, besides contributing numerous articles to military journals, he has written ten books, five of which are in the Osprey Campaign series The author lives in London, UK.