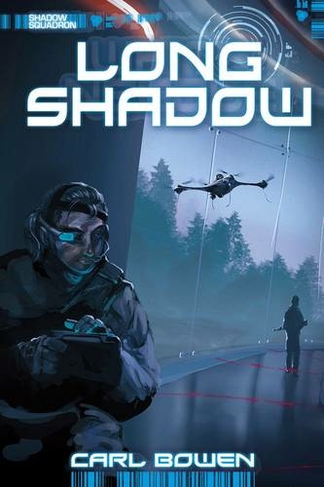 When a video surfaces of a man making terrorist demands, Shadow Squadron is tasked with finding answers. With the help of an ex-teammate, Lieutenant Commander Ryan Cross discovers that the speaker is a former American soldier - and a member of the original Shadow Squadron. Although the team is eager to capture a traitor, the situation is not what it seems.

Carl Bowen is a father, husband, and writer living in Lawrenceville, Georgia. He has published a handful of novels, short stories, and comics. For Stone Arch Books and Capstone, Carl has retold 20,000 Leagues Under the Sea (by Jules Verne), The Strange Case of Dr. Jekyll and Mr. Hyde (by Robert Louis Stevenson), The Jungle Book (by Rudyard Kipling), "Aladdin and His Wonderful Lamp" (from A Thousand and One Nights), Julius Caesar (by William Shakespeare), and The Murders in the Rue Morgue (by Edgar Allan Poe). Carl's novel, Shadow Squadron: Elite Infantry, earned a starred review from Kirkus Book Reviews. Benny Fuentes lives in Villahermosa, Tabasco in Mexico, where the temperature is just as hot as the sauce. He studied graphic design in college, but now he works as a full-time colorist in the comic book and graphic novel industry for companies like Marvel, DC Comics, and Top Cow Productions. He shares his home with two crazy cats, Chelo and Kitty, who act like they own the place. Wilson "Wunan" Tortosa is a Filipino comic book artist best known for his works on Tomb Raider and the American relaunch of Battle of The Planets for Top Cow Productions. Wilson attended Philippine Cultural High School, then went on to the University of Santo Tomas where he graduated with a Bachelor's Degree in Fine Arts, majoring in Advertising.