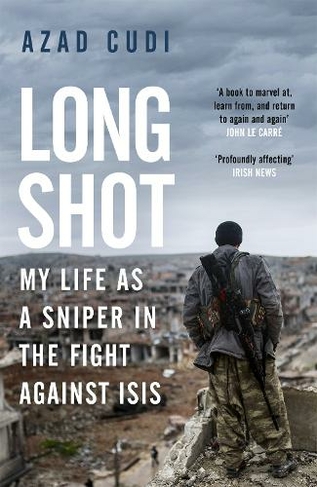 Long Shot: My Life As a Sniper in the Fight Against ISIS

In September 2014, Azad Cudi became one of seventeen snipers deployed when ISIS, trying to shatter the Kurds in a decisive battle, besieged the northern city of Kobani. In LONG SHOT, he tells the inside story of how a group of activists and idealists withstood a ferocious assault and, street by street, house by house, took back their land in a victory that was to prove the turning point in the war against ISIS. By turns devastating, inspiring and lyrical, this is a unique account of modern war and of the incalculable price of victory as a few thousand men and women achieved the impossible and kept their dream of freedom alive.

Azad is a 34-year-old British national from a Kurdish background. Based in London and Brussels, Azad grew up in Iran, where he was conscripted into the army and escaped to the UK. Aged 19, he was granted asylum and citizenship, learnt English and began working as a journalist for the Kurdish diaspora media. In 2011, Azad was working for a television station in Stockholm when the Syrian civil war broke out and the Kurds established their autonomous enclave. Azad's response was to fly out to Syria and work as a social worker, but as the civil war expanded he became a fighter in the volunteer army, the YPG, our allies in the 62 country anti-ISIS coalition.