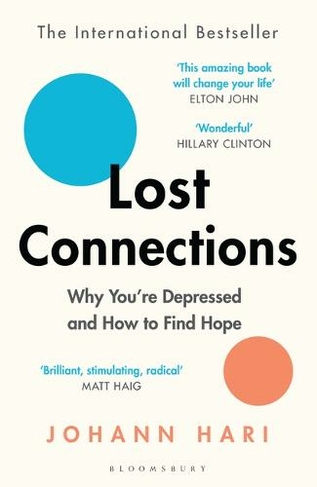 Lost Connections: Why You're Depressed and How to Find Hope

By Johann Hari (Author)
Paperback
https://www.whsmith.co.uk/products/lost-connections-why-youre-depressed-and-how-to-find-hope/johann-hari/paperback/9781408878729-12-000.html £7.37 rrp £8.99 Save £1.62 (18%)
GBP
Availability
In Stock
Free Delivery Available When You Spend £25 Or More
Details
Spend £25 On Products To Receive Free Standard Delivery To Your Home Or Free Next Working Day Click And Collect To Store

THE INTERNATIONAL BESTSELLER 'A book that could actually make us happy' SIMON AMSTELL 'This amazing book will change your life' ELTON JOHN 'One of the most important texts of recent years' BRITISH JOURNAL OF GENERAL PRACTICE 'Brilliant, stimulating, radical' MATT HAIG 'The more people read this book, the better off the world will be' NAOMI KLEIN 'Wonderful' HILLARY CLINTON 'Eye-opening' GUARDIAN 'Brilliant for anyone wanting a better understanding of mental health' ZOE BALL 'A game-changer' DAVINA MCCALL 'Extraordinary' DR MAX PEMBERTON 'Beautiful' RUSSELL BRAND Depression and anxiety are now at epidemic levels. Why? Across the world, scientists have uncovered evidence for nine different causes. Some are in our biology, but most are in the way we are living today. Lost Connections offers a radical new way of thinking about this crisis. It shows that once we understand the real causes, we can begin to turn to pioneering new solutions - ones that offer real hope.

JOHANN HARI is an internationally bestselling author. His first book, Chasing the Scream, was a New York Times bestseller and is being adapted into a Hollywood feature film. His second book, Lost Connections, was a Sunday Times and New York Times bestseller. He has written for the New York Times, the Los Angeles Times, Le Monde and others, and he was twice named Newspaper Journalist of the Year by Amnesty International. His TED Talk, 'Everything You Think You Know About Addiction Is Wrong', and the animation based on it, have had more than twenty million views. His books have been translated into eighteen languages. thelostconnections.com / chasingthescream.com / @johannhari101