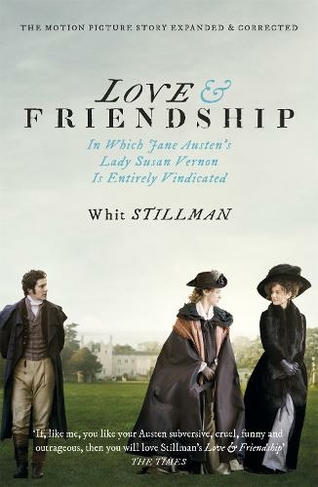 ***THE NOVEL OF THE HIT INDIE FILM*** 'If, like me, you like your Austen subversive, cruel, funny and outrageous, then you will love Stillman's Love & Friendship' The Times 'Lady Susan is finally getting some long overdue respect' New York Times 'Lady Susan remains deliciously wicked' Vogue With a pitch-perfect Austenian sensibility and wry social commentary, filmmaker and writer Whit Stillman cleverly re-imagines and completes one of our greatest writers' unfinished works. Love & Friendship is a sharp comedy of manners, and a fiendishly funny treat for Austen and Stillman fans alike. JANE AUSTEN'S FUNNIEST NOVEL IS ALSO HER LEAST KNOWN - UNTIL NOW. Impossibly beautiful, disarmingly witty, and completely self-absorbed: meet Lady Susan Vernon, both the heart and the thorn of Love & Friendship. Recently widowed with a daughter who's coming of age as quickly as their funds are dwindling, Lady Susan makes it her mission to find them wealthy husbands - and fast. But when her attempts to secure their futures result only in the wrath of a prominent conquest's wife and the title of 'most accomplished coquette in England', Lady Susan must rethink her strategy. Unannounced, she arrives at her brother-in-law's country estate. Here she intends to take refuge - in no less than luxury, of course - from the colorful rumors trailing her, while finding another avenue to 'I do'. Before the scandalizing gossip can run its course, though, romantic triangles ensue. A SPECIAL EDITION FEATURING JANE AUSTEN'S ORIGINAL NOVELLA AS ANNOTATED BY THE NARRATOR. PRAISE FOR LOVE & FRIENDSHIP THE FILM 'A RACY DELIGHT' Guardian ***** 'FIND ME A FUNNIER SCREEN STAB AT AUSTEN, AND I'M TEMPTED TO OFFER YOUR MONEY BACK PERSONALLY' Telegraph ***** 'TREMENDOUSLY WITTY' Independent ***** 'MAY JUST BE THE BEST JANE AUSTEN FILM EVER MADE' London Evening Standard *****

Whit Stillman - winner of France's Prix Fitzgerald for his prior novel - is the writer-director of five films, including Metropolitan, Barcelona, The Last Days of Disco, Damsels in Distress, and Love & Friendship, a mendacious representation of this story. At university, he was an editor of the Harvard Crimson and later worked in book publishing and journalism. His first novel, The Last Days of Disco, With Cocktails at Petrossian Afterwards, also derived from a film story.@WhitStillman