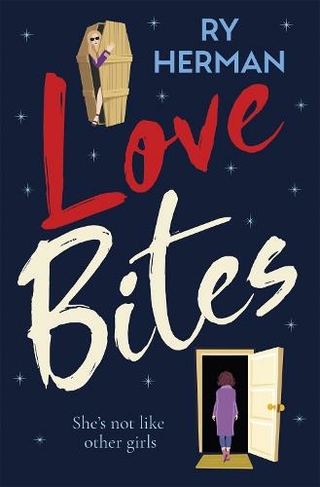 Love Bites: A laugh-out-loud queer romance with a paranormal twist

By Ry Herman (Author)
Paperback
£8.19 rrp £9.99 Save £1.80 (18%)
GBP
Availability
In Stock
Free Delivery Available When You Spend £15 Or More
Details
Spend £15 On Products To Receive Free Standard Delivery To Your Home Or Free Next Day Click and Collect To Stores
Share

Tender and unforgettable, Love Bites is a laugh-out-loud, queer romance with a surprising paranormal twist. Two years after a painful divorce, Chloe is still struggling to leave the house, paralysed by anxiety and memory. So when she's bullied into a night of dancing by her busybody aunt and finds herself in a goth club, on her own, in a strange part of town, she isn't looking for anything more than to pass the time until she can leave. Then she meets Angela, a smart, beautiful astronomy Ph.D. student whose smile makes her heart pound. In Angela's eyes, Chloe can see a future. Suddenly, home alone is the last place Chloe wants to be. Trouble is, Angela can only come out at night. Angela doesn't feel the cold. Angela doesn't eat. Angela doesn't have a pulse. Angela has sharp and deadly teeth. Angela and Chloe might just be perfect for each other. But how do you build a life together when one of you is already dead?

Born in the US, Ry Herman is now a permanent Scottish resident, and has been writing theatrical plays for most of his life. He's worked at a variety of jobs, including submissions editor, theatre technician, and one job which could best be described as typing the number five all day long. He acts and directs, and is performing at the Edinburgh Fringe Festival in 2019. He is bisexual and genderqueer. Hobbies include baking bread, playing tabletop roleplaying games, and reading as many books as humanly possible.