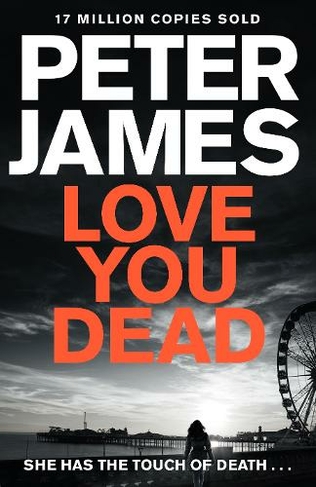 An ugly duckling as a child, Jodie Bentley had two dreams in life - to be beautiful and rich. She's achieved the first, with a little help from a plastic surgeon, and now she's working hard on the second. Her philosophy on money is simple: you can either earn it or marry it. Marrying is easy, it's getting rid of the husband afterwards that's harder, that takes real skill. But hey, practice makes perfect . . . Detective Superintendent Roy Grace is feeling the pressure from his superiors, his previous case is still giving him sleepless nights, there have been major developments with his missing wife Sandy, and an old adversary is back. But worse than all of this, he now believes a Black Widow is operating in his city. One with a venomous mind . . . and venomous skills. Soon Grace comes to the frightening realization that he may have underestimated just how dangerous this lady is. Love You Dead is the gripping twelfth book in Peter James' Roy Grace series.

Peter James is the international bestselling author of many award-winning novels. His Detective Superintendent Roy Grace series, set in Brighton, has been translated into thirty-seven languages with worldwide sales of over eighteen million copies, and has given him nine consecutive Sunday Times number ones. In 2015 WHSmith customers publicly voted him the Greatest Crime Author of All Time and in 2016 he became the recipient of the coveted CWA Diamond Dagger lifetime achievement, awarded for sustained excellence. Peter has also written a short story collection, A Twist of the Knife, and his standalone titles include his ghost story The House On Cold Hilland The Perfect Murder, which has been turned into a smash hit stage play. All his novels reflect his deep interest in the world of the police. Three of his novels have been filmed and before becoming a full-time author he produced numerous films, including The Merchant of Venice, starring Al Pacino and Jeremy Irons. He divides his time between his homes in Notting Hill, London and near Brighton in Sussex.