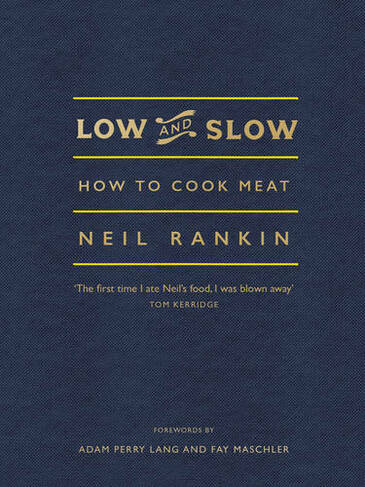 Low and Slow: How to Cook Meat

By Neil Rankin (Author)
Hardback
https://www.whsmith.co.uk/products/low-and-slow-how-to-cook-meat/neil-rankin/hardback/9781785030871-12-000.html N/A
GBP
Availability
Currently unavailable. We dont know when or if this item will be back in stock
Free Saver Delivery on orders over £25
Details
FREE SHIPPING over £25 for Saver Delivery
Share

No kitchen dramas or barbecue fails ever again. Just perfectly cooked meat. OFM award-winner Neil Rankin knows how to cook meat. In this book he explains how he does it, using the foolproof methods he has honed to perfection and relies on in the kitchens of Temper in London. "If you have ever cooked a steak medium-well instead of medium-rare, a chicken that ends up dry, a stew that's tough or stringy or a rack of ribs that fall too much off the bone then this book will make your life that little bit better." Neil Rankin 'You've cost me a bloody fortune. Steak on four nights...Perfect every time. My boys - steak mad - are so happy.' Diana Henry 'Simply put: Rankin's book will make you 100% more brilliant behind the stove.' Grace Dent 'The first time I ate Neil's food, I was blown away' Tom Kerridge 'Fire-cooking is unavoidably tactile 'real' cooking and Neil is one of the heroes leading the charge. He eschews sterility and embraces flame.' Adam Perry Lang 'Meat hates to be overcooked, says Neil, so low and slow is the way to go which obviates brining, resting, letting joints come to room temperature and other shibboleths learned at our mothers' knee. There is a great deal useful and inspiring to be absorbed here from a battle-scarred Scotsman in a trucker's cap... and tongs as an extension of his fingers.' Fay Maschler 'Without any doubts the best meat/bbq book I've read! Everything about it is just spot on.' @artisanbaker 'The book is fantastic. Managed not to overcook a beef joint for the first time ever!' @KungFuBBQ

Neil is the chef behind Temper Soho and Temper City. Temper won best newcomer at the OFM Awards in 2017. Temper Soho is an open fire-pit restaurant serving up barbecue with a South American influence - tacos, tortillas and mezcal. Temper City serves up barbecue with an Indian influence - offering curry, tandoor and roti breads.Before opening Temper, Neil Rankin had cooked at Rhodes 24 and Chez Bruce, Barbecoa, Pitt Cue and John Salt. Neil opened Smokehouse in 2013 and a second Smokehouse in 2015 as well as Bad Egg, all in London. Neil is also a regular at Meatopia and part of London Union.Low and Slow is Neil Rankin's first book.