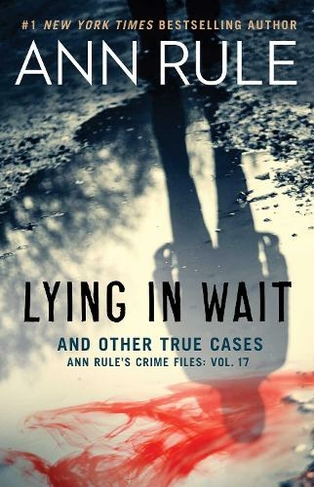 Ann Rule presents a collection of fascinating and disturbing true-crime stories-drawn from her real-life personal files-in this seventeenth volume in the #1 New York Times bestselling Crime Files series. In this gripping collection of investigative accounts from her private archives, "America's best true-crime writer" (Kirkus Reviews) exposes the most frightening aspect of the murderous mind: the waiting game. Trusted family members or strangers, these cold-blooded killers select their unsuspecting prey, wait for the perfect moment to strike, then turn normality into homicidal mayhem in a matter of moments. Ann Rule will have you seeing the people and places around you with heightened caution as you read these shattering cases, including: * New mothers murdered, their infants kidnapped, in an atrocious baby-selling scheme * The man who kept his criminal past hidden from his wife-and his wife from his mistress-until he coldly disposed of one of them * The beautiful daughter of a State Department official ran away from the privileged world she knew and hitched a ride with a man she didn't . . . with fatal consequences * For months, a vicious, rage-filled serial rapist eluded police and terrorized Seattle's women-when would he strike next, and how far would his violence escalate? * A criminal known for his Houdini-like escapes is serving time for murder in a botched robbery-now the convict is being served dinner in a civilian's home, where he has one more trick up his sleeve * A long-lost relative who came home to visit, leaving a bloody trail through Washington and Oregon; no one realized how dangerous he and his ladylove were-until it was far too late. . . . With her ability to translate the most complex cases into storytelling "as dramatic and chilling as a bedroom window shattering at night" (The New York Times), Rule expertly analyzes the thoughts and deeds of the sociopath, in this seventeenth essential Crime Files volume. 1 8-pg and 1 16-pg b&w inserts

Ann Rule, a former Seattle police officer, has published twenty-six international bestsellers, all of them still in print. A certified instructor for police training, she has twice testified before the U.S. Senate on victims' rights and serial murder. She lives near Seattle, Washington.