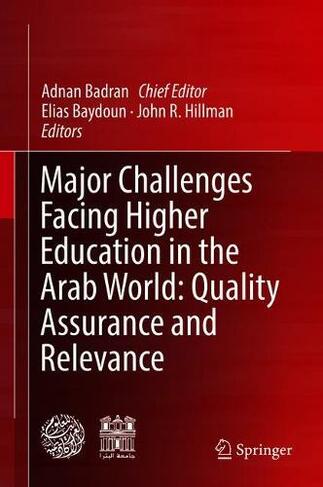 This book focuses on two crucial issues that need to be addressed as a matter of urgency by universities in the Arab region, namely (a) conducting independent assessments of the quality of their teaching, research, administration, governance, and planning; and (b) determining the relevance of their teaching, research, and societal impacts. Although well-established around the world in manufacturing industries and private-sector service industries, including the research and commercialisation arms of the major universities and research institutes, it is only in recent years that quality-assurance (QA) assessments have started to be applied to most aspects education. Several Arab universities are adopting various forms of QA but some variants are little more than bureaucratic "box-ticking" exercises with minimal commitment by staff to the ultimate aim of continuing self-improvement. This book will be of interest to senior management at faculty and departmental level and above in all Arab universities specifically, and more generally in Islamic institutions of higher education. Senior management in other universities, especially in the developing world will benefit from its analyses and recommendations. 34 Illustrations, color; 12 Illustrations, black and white; VI, 382 p. 46 illus., 34 illus. in color.

Adnan BadranProfessor Badran is currently Chairman Board of Trustees University of Jordan, Chancellor University of Petra, with 120 publications, including 22 books and patents. Received BSc, at Okla. State Univ. MSc, Phd, at Mich. State Uni. Awarded honorary doctorates from, Sungkyunkwan University, Seoul; an Honorary Doctorate in Science from Michigan State University; West Watkins distinguished Lectureship Award and Hall of Fame Alumni Award from Oklahoma State University USA; Honorary Professorship from Eurasian National University Kazakhstan; Honorary Doctorate in Business, Yarmouk Uni., Jordan. Awarded Arab Thought Foundation for best Arab Scientist in higher education research; TWAS Regional Prize for Building Scientific Institutions; Asia award for Outstanding Contribution to education.Prof. Badran is the President Arab Academy of Sciences and AFED; President of University of Petra, Jordan (2007-2014); Former Prime Minister of Jordan (2005); Minister of Agriculture Minister of Education (1989); President of Philadelphia University (1998 - 2005); Former Deputy Director General of UNESCO (DDG/ADG) Paris (1990-1998); Founding President of Yarmouk University & Founder of the Science and Technology University Campus (JUST University), Jordan (1976-1986); Dean of the Faculty of Science at the University of Jordan (1971 - 1976). Elias BaydounDr. Baydoun was educated at the University of Jordan, Amman (BSc, 1971), the American University of Beirut (AUB) (MSc, 1977) and the University of Cambridge (MPhil, 1978 and PhD, 1980). At present Professor of Biology at AUB and secretary general of the Arab Academy of Sciences. Previous positions include: Chairman of the Biology Department at AUB and Assistant president and Director of Planning and Development at Yarmouk University, Jordan. Awards include: The Award,of the Federation of Arab Scientific Research Councils, Abdul Hamid Shoman Prize for Young Arab Scientists for Biology, Distinguished Scholar Award of the Arab Fund for Economic and Social Development, and the Developing World Study Award of the Royal Society, UK. Membership in Societies: Cambridge Philosophical Society; Biochemical Society, London; American Society for Plant Biologists,USA;Institute of Biology, London; the Arab Academy of Sciences and TWAS. Publications: Over 50 articles in refereed international journals in addition to proceedings of international conferences and books. Research Interests include: plant cell wall biosynthesis, membrane fusion, nanotechnology and medicinal plants. John HillmanProfessor Hillman, Director and Chief Executive of the Scottish Crop Research Institute (SCRI) during 1986-2005, oversaw the incorporation of the Scottish Agricultural Statistics Service (later retitled Biomathematics and Statistics Scotland - BioSS), staff transfers from the Macaulay Institute for Soil Research, links with the University of Dundee, establishment of Mylnefield Research Services Ltd, new buildings, expansion of staff numbers, and major revision of the research portfolio. Prior to his appointment at SCRI, he was Professor and Head of the Department of Botany, University of Glasgow.In the period 1995-1997, he was Chairman of the UK Technology Foresight Sector Panel on Agriculture, Natural Resources and Environment and then the Agriculture, Horticulture and Forestry Sector Panel. During 2000-2005, he was a member of the Board of Directors of the BioIndustry Association and chairman of its Industrial Biotechnology Group. Other positions held include President of the Agriculture and Food Section of the British Association; member of Court of the University of Abertay Dundee; visiting professorships in the Universities of Dundee, Edinburgh, and Strathclyde; editor and referee for several scientific journals; various committees of the Royal Society of Edinburgh; and member of the Scottish Funding Council Research and Knowledge Transfer Committee. He is scientific advisor to various or