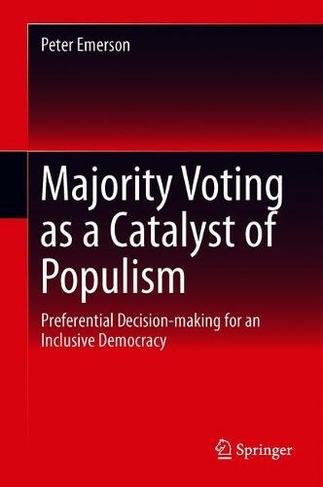 Majority Voting as a Catalyst of Populism: Preferential Decision-making for an Inclusive Democracy (1st ed. 2020)

This timely book presents a critique of binary majority rule and provides insights into why, in many instances, the outcome of a two-option ballot does not accurately reflect the will of the people. Based on the author's first-hand experience, majority-voting is argued to be a catalyst of populism and its divisive outcomes have prompted countless disputes throughout Europe and Asia. In like manner, simple majority rule is seen as a cause of conflict in war zones, and of dysfunction in so-called stable democracies. In order to safeguard democracy, an all-party power-sharing approach is proposed, which would make populism less attractive to voters and governments alike. In geographically arranged chapters, well-tested alternative voting procedures (e. g. non-majoritarian Modified Borda Count) are presented in case studies of Northern Ireland, Central Europe, the Balkans, the Caucasus, Russia, China, North Korea and Mongolia. 7 Illustrations, color; 26 Illustrations, black and white; XXXIX, 227 p. 33 illus., 7 illus. in color.

Peter Emerson is the director of the Belfast-based international NGO "The de Borda Institute". He has campaigned for inclusive governance since 1978. His publications include From Majority Rule to Inclusive Politics (Springer, 2016), Defining Democracy: Voting Procedures in Decision-Making, Elections and Governance (2nd ed. in 2012, Springer) and Designing an All-Inclusive Democracy: Consensual Voting Procedures for Use in Parliaments, Councils and Committees (Springer, 2007).