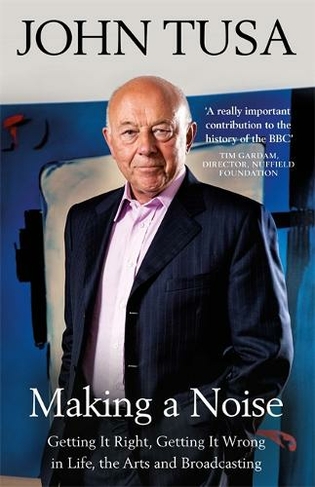 Making a Noise Getting It Right, Getting It Wrong in Life, Arts and Broadcasting

John Tusa is a distinguished journalist, broadcaster and leader of arts organisations, best remembered for his times at the BBC, including creating Newsnight. Tusa's memoir is etched with candour. His account of two years of internecine warfare at the top of the BBC under the Chairman, 'Dukey' Hussey will go down as a major contribution to BBC history. His recollections of a hilarious and petty-minded few months as head of a Cambridge college will be read as a case study of the absurdities of academic life; while running the rejected and maligned Barbican Centre, Tusa led its recovery into the major cultural centre that it is today.

Born in Czechoslovakia in 1936, John Tusa came to England in 1939. He was educated at Gresham's School, Holt, before serving as Second Lieutenant Royal Artillery in West Germany during National Service from 1954-56. Reading history at Trinity College, Cambridge from 1956-59, he took a first class honours degree. After two decades as a freelance, he became main presenter with Peter Snow of BBC 2's Newsnight from its foundation in 1980. From 1986-92 he was Managing Director of BBC World Service. He spent a few months as President of Wolfson College, Cambridge in 1993. From 1995-2007 he was Managing Director of the Barbican Centre. Between 2007 and 2014 he was Executive Chair of the Clore Leadership Programme and Chair of the Governors of University of the Arts London. Now he is joint Chair of the European Union Youth Orchestra. He has sat on the Boards of several arts institutions. He was awarded a knighthood in 2003.