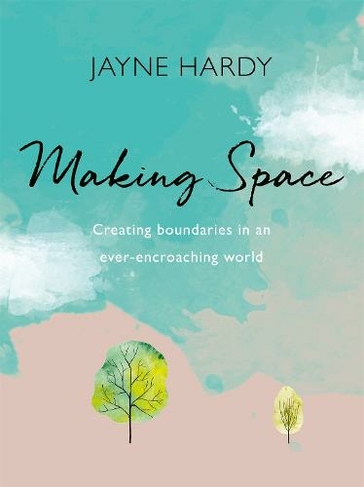 Boundaries and self-care go hand in hand; you can't have one without the other. We understand the importance of self-care, but how do we protect the space within which we do it? When we have healthy boundaries, we create a space between us and all else, where we feel safe, clear and confident in who we are and what we want and need. Our boundaries - the limits we place on what we will and won't tolerate - define our routines, habits, choices, parenting, jobs, relationships; everything. And there's nothing more important for our self-care. In this practical guide, Jayne Hardy - author of The Self-Care Project and founder and CEO of The Blurt Foundation - helps us explore our existing boundaries; the ones that work for us and the ones that work against us; and guides us on creating new boundaries so that our physical, mental, emotional and digital spaces are protected. Packed with friendly advice, the latest research and worksheets to help you reflect on your own experiences, Making Space is for anyone who feels overwhelmed, disconnected or walked on by life, and wants to make a change in an ever-encroaching world.

Jayne Hardy is the founder and CEO of The Blurt Foundation - a social enterprise dedicated to helping those affected by depression. Jayne lives in Cornwall with her husband, their daughter, and their dog. She has spoken, and written, about her own experiences of depression and self-care on BBC Radio 2, at TEDxBrum, and in publications such as Huffington Post, Grazia and Virgin.com, to name a few. Her innovative use of the internet to bring about positive social change was recognised from the off. She won the TalkTalk Digital Hero Award in 2011, and in 2014 was included in Marketing Magazine's list of Top Ten Digital Mavericks. Jayne has been mentioned as one of the 19 inspirational women leading the way in mental health by Rethink as part of their International Women's Day celebration. In 2016, Jayne led the viral #whatyoudontsee social media campaign.