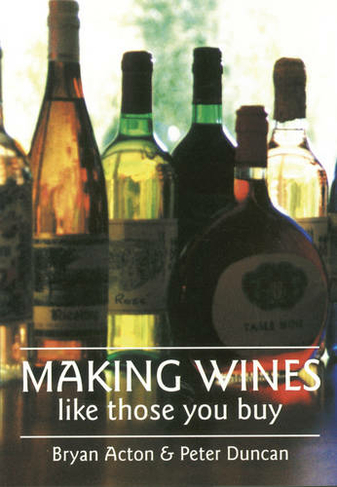 Making Wines Like Those You Buy: (2nd Revised edition)

In recent years there has been a rapid growth in the popularity of wines of all sorts. And although commercially produced wine has become less expensive, it is always a challenge to turn your own hand to reproducing the flavour and quality of commercial wines in your own home, using easily-obtained ingredients. Sauternes, Hocks, Moselles, Chianti, Madeiras, Champagnes and Liqueurs can all be made at home cheaply from easily available ingredients - are all possible with the help of this book. You can become a wine connoisseur on a shoestring budget! The line illustrations are all based on photographs from the Radio Times Hulton Picture Library. 12 black and white line drawings

Peter M. Duncan was born in Perth, Scotland. He was educated at Perth Academy and Edinburgh University, graduating in 1959 with a first class honours B.Sc. in chemistry. Married with two sons, he has lived in Quebec, Canada since 1962. On the winemaking front, he founded the Huron Wine Guild, has been a member of both the Canadian and British National Guilds of Judges and used to write a popular weekly column called The Winemaker's Forum for local and national newspapers. Bryan Acton was educated at Eltham College and lived in Bletchley, Buckinghamshire. He was introduced to winemaking by Trappist Monks in Palestine in 1943, while he was on armed service and progressed to being a member of the Amateur Winemaker National Guild of Judges.