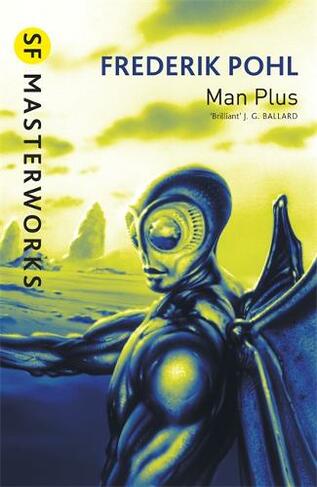 The award-winning account of a man changed beyond all recognition so that he can be part of a bold experiment to live on Mars Ill luck made Roger Torraway the subject of the Man Plus Programme, but it was deliberate biological engineering which turned him into a monster - a machine perfectly adapted to survive on Mars. For according to computer predictions, Mars is humankind's only alternative to extinction. But beneath his monstrous exterior, Torraway still carries a man's capacity for suffering.

Frederik Pohl (1919-2013)Frederik Pohl had an extensive career as both a writer and editor spanning over seventy years. Using various pseudonyms, Pohl began writing in the late 1930s, his first published work being a poem titled "Elegy to a Dead Planet: Luna", which appeared in the October 1937 issue of Amazing Stories. Pohl edited both Astonishing Stories and Super Science Stories between 1939 and 1943 and whilst many of his own stories appeared in these two pulp magazines they were never under his own name. After this period, from 1943 to 1945, Pohl served in the U.S. Army, rising to the rank of sergeant as an air corps weatherman. Between the end of the war and the early '50s, Pohl was active as a literary agent, representing many successful writers of the genre including Isaac Asimov. The winner of multiple Hugo and Nebula awards, Pohl became the SFWA Grand Master in 1993 and was inducted by the Science Fiction Hall of Fame in 1998. He died in September 2013.