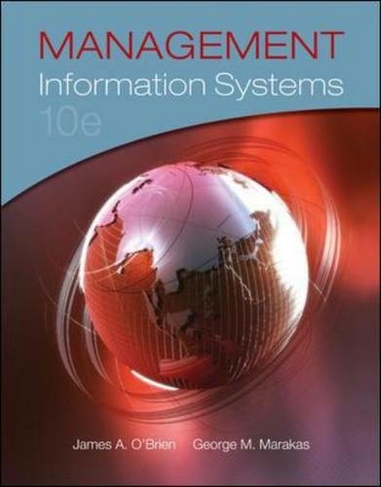 The benchmark text for the syllabus organized by technology (a week on databases, a week on networks, a week on systems development, etc.) taught from a managerial perspective. O'Brien defines technology and then explains how companies use the technology to improve performance. Real world cases finalize the explanation. 225 Illustrations, unspecified

James A. O'Brien completed his undergraduate studies at the University of Hawaii and Gonzaga University and earned an MS and PhD in Business Administration from the University of Oregon. He has been professor and coordinator of the CIS area at Northern Arizona University, professor of Finance and Management Information Systems and chairman of the Department of Management at Eastern Washington University, and a visiting professor at the University of Alberta, the University of Hawaii, and Central Washington University. Jim's research interests lie in developing and testing basic conceptual frameworks used in information systems development and management. He has written eight books, including several that have been published in multiple editions. He has also contributed to the field of information systems through the publication of many articles in business and academic journals, as well as through his participation in academic and industry associations in the field of information systems. George M. Marakas is an associate professor of Information Systems at the School of Business at the University of Kansas. His teaching expertise includes Systems Analysis and Design, Technology-Assisted Decision Making, Electronic Commerce, Management of IS Resources, Behavioral IS Research Methods, and Data Visualization and Decision Support. In addition, George is an active researcher in the area of Systems Analysis Methods, Data Mining and Visualization, Creativity Enhancement, Conceptual Data Modeling, and Computer Self-Efficacy. George received his PhD in Information Systems from Florida International University in Miami and his MBA from Colorado State University. Throughout his academic career, George has distinguished himself both through his research and in the classroom. He has received numerous national teaching awards and his research has appeared in the top journals in his field. In addition to this text, he is also the author of three best-selling textbooks in information systems: Decision Support Systems for the 21st Century, Systems Analysis and Design: An Active Approach, and Data Warehousing, Mining, and Visualization: Core Concepts.