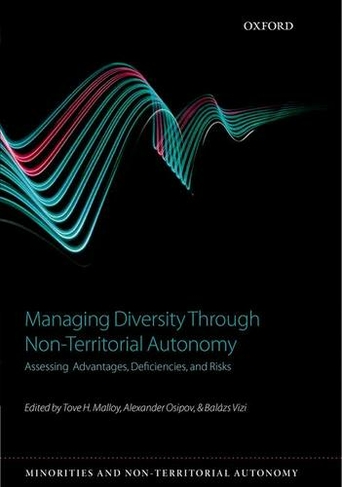 Non-territorial autonomy (NTA) is a statecraft tool that is increasingly gaining importance in societies seeking to accommodate demands by ethno-cultural groups for a voice in cultural affairs important to the protection and preservation of their identity, such as language, education, and religion. As states recognize the specific rights of identity minorities in multicultural and multi-ethnic societies, they are faced with a need to improve their diversity management regimes. NTA offers policy-makers a range of options for institutional design adaptable to specific circumstances and historical legacies. It devolves degrees of power through legal frameworks and institutions in specific areas of ethno-cultural life, while maintaining social unity at the core level of society. Throughout Europe and North America, NTA exists and is implemented at a state, regional, and local level. Much has been written about the concept of autonomy and its usage as a statecraft tool in states facing regional division, but little literature addresses its non-territorial institutional and public administration functions. This edited volume seeks to fill this gap. Managing Diversity through Non-Territorial Autonomy: Assessing Advantages, Deficiencies, and Risks, carves a space for contextual knowledge production on NTA in law, as well as social and political sciences. Contextual knowledge involves a description of institutions and their functionality as well as of the institutional and legal frames protecting these. What are the institutions, bodies, and functions that ethno-cultural groups can draw on when seeking to have a voice over their own affairs, as well as over issues in society related to their identity production? How are these entities incorporated and empowered to have a voice? What degree of voice do they have, and how are they designed to project this voice? Thus, contextual knowledge also involves critical assessment and risk analysis as well as penetrating insights as to the unintended consequences and hidden agendas that may inform NTA policies. This volume is to provide both policy-makers and ethno-cultural groups with a tool-kit that promotes social cohesion while respecting diversity. This is the first volume in a series of five which will examine the protection and representation of minorities through non-territorial means.

Tove H. Malloy is Director of the European Centre for Minority Issues in Flensburg, Germany. She teaches at the Europa-University, Flensburg. She holds a PhD in political theory and specializes in the political and legal aspects of national and ethnic minority rights in International Law and International Relations, especially in the European context. She is currently a member of the Advisory Committee on the European Framework Convention for the Protection ofNational Minorities, elected by the Committee of Ministers of the Council of Europe in respect of Denmark. She is the author of National Minority Rights in Europe (OUP, 2005) as well as several edited books and numerous articles. Her main research interests include minority citizenship, agonisticdemocracy, ethno-ecologism, minority indicators, and inter-sectional discrimination. In addition to her academic career, Malloy has served as a diplomat in the Danish Foreign Service. Alexander Osipov is a Senior Research Associate of the European Centre for Minority Issues (Flensburg, Germany) and the head of ECMI's Justice & Governance Cluster. He is a historian, sociologist, and lawyer by background. Currently his research interests include ethnic and racial discrimination, non-territorial autonomy, and models of diversity policies. He is also conducting research on post-communist transformation in Belarus, Ukraine and Moldova. He previosly worked in a human rightorganization and carried out a number of research and human rights advocacy projects in Russia. Balazs Vizi is a lawyer and holds a PhD in political science. He has specialized in international human and minority rights protection. He is senior researcher at the Institute for Minority Studies, Centre for Social Science of the Hungarian Academy of Sciences, and an Associate Professor at the Department of International and European Law of the National University of Public Service (Budapest). He is a senior non-resident researcher of the European Centre for Minority Issues. He isauthor of several publications on minority issues in the context of the European Union and co-editor of several books on minority rights protection. His main research interest cover the political and linguistic rights of minorities, minority issues, European integration, and citizenship policies.