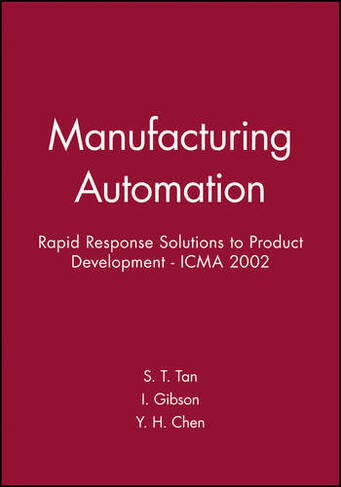 This text covers all aspects of manufacturing automation popular in research. CAD, CIM, rapid prototyping and tooling, industrial robotics, process planning, geometric modelling and feature-based technology are all covered here. Other topics include product development, high-efficiency machining and Internet-based design. The broad theme of the contributions is rapid development with the emphasis on software, modelling and planning. A range of work from international experts is brought together offering insights and developments in the following fields of research: design systems and methodologies; machining technology; intelligent systems; technology management; rapid product development; and Internet-based systems. Ideas, research and technological developments in the areas of manufacturing automation are explored to inform those working in the field and to foster better links between industry and academia.

Professor Nam Pyo Suh Professor Nam P Suh is the Ralph E & Eloise F Cross Professor and Director of the Manufacturing Institute at MIT. He served as Head of the Department of Mechanical Engineering at MIT for ten years, from 1991 to 2001. In October 1984, Professor Suh accepted a Presidential Appointment (by Ronald Reagan) at the National Science Foundation where he was in charge of engineering. His contributions to the field of tribology include the delamination theory of wear, the solution wear theory, a theory on the genesis of friction, coated cutting tools, and the use of undulated surfaces to lower friction and wear. His paper on the delamination theory of wear was chosen as the citation classic by the Institute of Scientific Information (ISI). In the field of design, he developed the subject of axiomatic design. In the field of polymer processing, he invented many important processes and devices, including microcellular plastics (commercially known as MuCell) and many others. In metal processing, he is the inventor of a new metal processing technique called the Mixalloy Process. He is the author of more than 280 papers and five books, holds about fifty patents, and edited several books. Among the books he has authored are Elements of the Mechanical Behavior of Solids (with A P L Turner), Tribophysics, The Principles of Design, The Delamination Theory of Wear, and Axiomatic Design: Advances and Applications. Professor Suh is a Series Editor for the Advanced Manufacturing Series and the MIT-Pappalardo Series of Oxford University Press. He was also the Founding Co-Editor-in-Chief of the International Journal, Robotics and Computer-Integrated Manufacturing, and also serves on many editorial boards. Professor Suh has received three honorary doctoral degrees: Doctor of Humane Letters from the Univ. of Massachusetts-Lowell in 1988, Doctor of Engineering from Worcester Polytechnic Inst. in 1986, and Honorary Doctor (Tekn. Hedersdoktor) from Royal Inst. of Technology (KTH), Stockholm, Sweden, in 2000. He also received the Gustus L Larson Memorial Award, the Blackall Award, the Best Tribology Paper Award, and the William T Ennor Manufacturing Technology Award from ASME; the F W Taylor Research Award of SME; an SPE Best Paper Award; Federal (NSF) Engineer of the Year Award from NSPE; and the American Society for Engineering Education Centennial Medallion. He was also awarded the NSF's Distinguished Service Award. In 1994, he was awarded the KBS Korean Compatriot Award for Scholarly Achievements. He is also the winner of the 1997 Ho-Am Prize for Engineering. In 2000, he was the recipient of the Mensforth International Gold Medal of the Institution of Electrical Engineers of the United Kingdom. In 2001, he received the Hills Millennium Award from the Institution of Engineering Designers of the United Kingdom. He is a Fellow of ASME and a member of ASEE, SPE, and AAAS. He is also a Foreign member of the Royal Swedish Academy of Engineering Science (IVA), a member of College International pour l'Etude Scientifique des Techniques de Production Mecanique (CIRP), and the Life Fellow of the Korean Academy of Science and Technology. Professor Suh is an honorary professor at Yanbian Univ. of Science and Technology, China, and an Eminent Visiting Professor at the Korea Advanced Inst. of Science and Technology, Korea. He has been on visiting committees of Georgia Inst. of Technology, Stanford University, the University of Michigan, the Texas A&M University, and the Univ. of California - Berkeley. He was a member of the Visiting Committee for the National Inst. of Standards and Technology (a statutory committee) and served on a research award committee of ASEE. Professor Suh also served on advisory committees of the Lawrence Livermore National Laboratory, the Idaho National Engineering Laboratory, and Alcan Aluminum Corp. Professor Suh has served as a consultant for many international and national industrial firms, including the Lawrence Liver