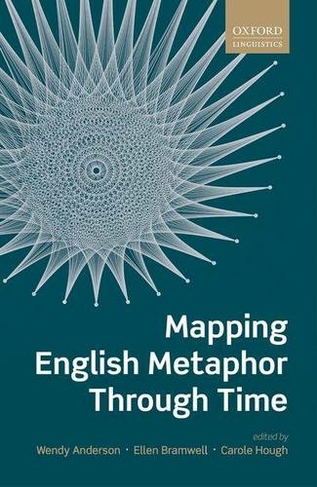 This volume offers an empirical and diachronic investigation of the foundations and nature of metaphor in English. Metaphor is one of the hot topics in present-day linguistics, with a huge range of research focusing on the systematic connections between different concepts such as heat and anger (fuming, inflamed), sight and understanding (clear, see), or bodies and landscape (hill-foot, river-mouth). Until recently, the lack of a comprehensive data source made it difficult to obtain an overview of this phenomenon in any language, but this changed with the completion in 2009 of The Historical Thesaurus of English, the only historical thesaurus ever produced for any language. Chapters in this volume use this unique resource as a basis for case studies of semantic domains including Animals, Colour, Death, Fear, Food, Reading, and Theft, providing a significant step forward in the data-driven understanding of metaphor.

Wendy Anderson is Senior Lecturer in English Language at the University of Glasgow. Her research and teaching interests include semantics, metaphor, corpus linguistics, collocation and phraseology, and intercultural language education. She was Principal Investigator for the AHRC-funded project 'Mapping Metaphor with the Historical Thesaurus' (2012-2015), which sought to trace metaphor throughout the history of English, and the follow-on project 'Metaphor in theCurriculum' (2015-2016), which created materials on metaphor for use in secondary education. She is the author, with John Corbett, of Exploring English with Online Corpora (Palgrave MacMillan, 2009).Ellen Bramwell is a Research Associate working on metaphor and education at the University of Glasgow. She was Research Associate on the 'Mapping Metaphor with the Historical Thesaurus' project and the follow-on project 'Metaphor in the Curriculum', and previously worked on the Historical Thesaurus of English (published as the Historical Thesaurus of the Oxford English Dictionary) and the 'Scots Words and Place-names' project. In addition to her research interests in digitalhumanities, semantics, and lexicography, she specializes in onomastics and sociolinguistics, with a particular interest in personal naming systems.Carole Hough is Professor of Onomastics at the University of Glasgow, where she has taught for over 20 years. She is a historical linguist who specializes in name studies, Old English, and historical semantics. She has published widely in these and other fields. Her most recent book is 'An Ald Reht': Essays on Anglo-Saxon Law (2014), and her most recent edited volume is The Oxford Handbook of Names and Naming (2016). She has served as President of the International Council ofOnomastic Sciences and President of the International Society of Anglo-Saxonists, and is currently Vice-President of the Society for Name Studies in Britain and Ireland.