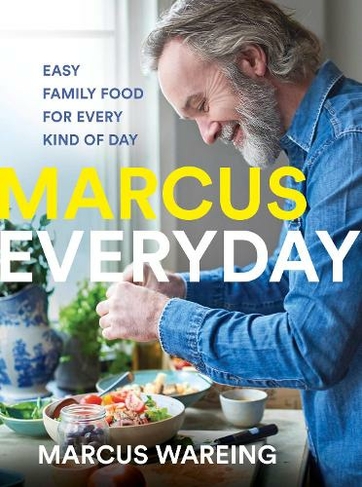 Marcus Everyday: Easy Family Food for Every Kind of Day

By Marcus Wareing (Author)
Hardback
https://www.whsmith.co.uk/products/marcus-everyday-easy-family-food-for-every-kind-of-day/marcus-wareing/hardback/9780008320997-12-000.html £20.00 rrp £25.00 Save £5.00 (20%)
GBP
Availability
In Stock
Free Delivery Available When You Spend £25 Or More
Details
Spend £25 On Products To Receive Free Standard Delivery To Your Home Or Free Next Working Day Click And Collect To Store

Create something easy and delicious for all the family, any day of the week. Marcus Everyday is filled with the delicious, go-to recipes that Michelin-starred chef Marcus Wareing cooks at home. From nourishing family favourites, to mid-week suppers and holiday feasts, these mouth-watering dishes can be enjoyed every day of the week. The 8 chapters also include the resourceful Garden Patch, quick fixes In the Fridge, as well as recipes to rustle up a real treat of a supper when you're Home Alone, cleverly put what's left at the back of your fridge to good use in the Waste Not Want Not chapter, inspirational Home Baking with your children or grandchildren, or catering for the masses in Weekend Dining. Packed with tips, tricks and techniques which will make every dish truly unforgettable, Marcus reveals how to really get the most out of each ingredient, so that anyone can create memorable meals in their own home kitchen. He also includes masterclasses that transform humble dishes into taste sensations: how to definitively cook the perfect steak, make flawless mash, as well as his fool-proof omelette. Maximise flavour, minimise waste, with the added touch of Michelin starred magic from one of Britain's best loved chefs. Marcus Everyday will make every day in the kitchen inspirational and each meal served at your table a delight. 100 col illus

MARCUS WAREING is one of the most respected and acclaimed chefs and restaurateurs in Britain. Originally from Southport, Marcus began his career at the age of 16. An incredible talent, he started acquiring Michelin stars aged just 26-one of only a handful of chefs to be recognised at such a young age. Over the last 30 years Marcus has been involved in the creation of many of London's most iconic restaurants, including his own restaurant group, Marcus Wareing Restaurants, which he founded in 2008.With one Michelin star at his flagship restaurant, Marcus, in the Berkeley Hotel, he also owns and operates The Gilbert Scott and Tredwell's.Marcus has also won numerous coveted awards. These include the Acorn Award, Chef of the Year with Caterer and Hotelkeeper, Tatler Restaurateur of the Year and GQ Chef of the Year.A familiar face on our TV screens, Marcus took on the new role as judge on MasterChef:The Professionals in 2014. Marcus lives in London with his wife and three children.