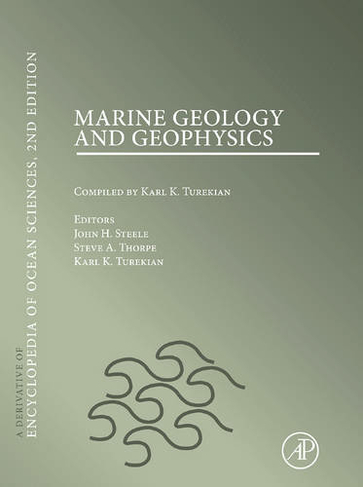 Elements of Physical Oceanography is a derivative of the Encyclopedia of Ocean Sciences, 2nd Edition and serves as an important reference on current physical oceanography knowledge and expertise in one convenient and accessible source. Its selection of articles-all written by experts in their field-focuses on ocean physics, air-sea transfers, waves, mixing, ice, and the processes of transfer of properties such as heat, salinity, momentum and dissolved gases, within and into the ocean. Elements of Physical Oceanography serves as an ideal reference for topical research.

KARL KAREKIN TUREKIAN (1927-2013) Karl Turekian was a man of remarkable scientific breadth, with innumerable important contributions to marine geochemistry, atmospheric chemistry, cosmochemistry, and global geochemical cycles. He was mentor to a long list of students, postdocs, and faculty (at Yale and elsewhere), a leader in geochemistry, a prolific author and editor, and had a profound influence in shaping his department at Yale University. In 1949 Karl joined a graduate program in the new field of geochemistry at Columbia University under Larry Kulp with students Dick Holland and his fellow Wheaton alums Wally Broecker and Paul Gast. This was a propitious time as Columbia's Lamont Geological Observatory had only been established a few years beforehand. It was during these years that Karl began to acquire the skills that led to his rapid emergence as a leader in geochemistry. After a brief postdoc at Columbia, Karl accepted a position as Assistant Professor of Geology at Yale University in 1956, where he set out to create a program in geochemistry from scratch. Karl spent the rest of his life on the Yale faculty and was immersed in geochemistry to the end. He was deeply involved in editing this edition of the massive Treatise on Geochemistry, which has grown to 15 volumes, until only a month before his passing away on 15 March 2013. Karl turned to the study of deep-sea cores and especially the analysis of trace elements to study the wide variety of geochemical processes that are recorded there. His work with Hans Wedepohl in writing and tabulating the Handbook of Geochemistry (Turekian, 1969) was a major accomplishment and this work was utilized by many generations of geochemists. Teaming up with his graduate students and in association with Paul Gast, he developed a mass spectrometry lab at Yale and began to thoroughly investigate the Rb-Sr isotopic systematics of deep-sea clays, not only as repositories but also as sites for exchange to occur and serve as a control of the geochemistry of ocean water. Karl was a major player in a revolutionary marine geochemistry campaign known as the Geochemical Ocean Section Study (GEOSECS). GEOSECS was part of the International Decade of Ocean Exploration in the 1970s, and it took aim at measuring and understanding the distribution of geochemical tracers for circulation and biogeochemistry in the world's oceans.. It was also within this same time period that another large-scale 'geochemical' sampling program known as Apollo 11 came along. Here Karl utilized his INAA techniques to examine some of the first returned lunar samples for their trace elements. Karl was particularly proud of being the holder of the Silliman Chair and being curator of the Yale meteorite collection. In a continuation of Karl's foray into cosmochemistry, Andy Davis came to Yale to study with Karl and Sydney Clark. Equally important to the legacy of what Karl did for science in his research contributions on and across the planet was his influence on scientists. His legendary daily coffee hours were a training ground for many generations of students, postdocs, and visitors, as well as a proving ground for Karl's own ideas. He had a great love for vigorous scientific debate. Karl loved to question and be questioned. Nothing was sacred and, in the act of questioning as in exploring, new science arises. He was extraordinarily supportive of people, always had time to discuss and listen, and helped everyone from students to his fellow faculty at Yale. Karl was twice department chair and even when not chair, a steadying influence in times of departmental difficulty. Andrew M. Davis, Lawrence Grossman and Albert S. Colman University of Chicago, Chicago, IL, USA Mark H. Thiemens University of California at San Diego, La Jolla, CA, USA This Obituary was first published in PNAS, Vol. 110, No. 41, 16290-16291, 10th October 2013 (c) 2013 Proceedings of the National Academy of Sciences of the United States and is reprodu