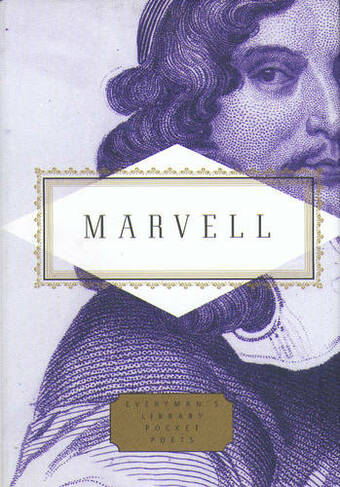 He is known chiefly for his brilliant lyric poems, including "The Garden," "The Definition of Love," "Bermudas," "To His Coy Mistress," and the "Horatian Ode" to Cromwell. Marvell's work is marked by extraordinary variety, ranging from incomparable lyric explorations of the inner life to satiric poems on the famous men and important issues of his time-one of the most politically volatile epochs in England's history. From the lover's famous admonition, "Had we but World enough, and Time, / This coyness, Lady, were no crime," to the image of the solitary poet "Annihilating all that's made / To a green Thought in a green Shade," Marvell's poetry has earned a permanent place in the canon and in the hearts of poetry lovers.

I62IBorn at Winestead-in-Holderness, Yorkshire, March 3I to the Rev. Andrew Marvell and his wife, Anne.I624Marvells move to Hull, where Rev. Andrew Marvell becomes lecturer in Holy Trinity Church.I633Marvell matriculates at Trinity College, Cambridge.I637Greek and Latin poems on Charles I and Queen Mary published.I638Marvell becomes a scholar of Trinity.I640Father dies. Marvell leaves Cambridge.I640-42Possible clerkship in trading-house of brother-in-law, Edmund Popple.I642-46?Travel abroad as tutor. (Dates uncertain.)I648-49Poems on Villiers (authorship questionable), Lovelace, Hastings.I650"An Horatian Ode upon Cromwell's Return from Ireland."I650-53Tutors Mary, daughter of the Lord General Fairfax, at Appleton House, Yorkshire.I653Milton's letter to Bradshaw, recommending Marvell for a government position, February 2I. No appointment forthcoming, Marvell becomes tutor to Cromwell's ward, William Dutton. Lives at Eton. "The Character of Holland."I653-54Latin Poems on Queen Christina of Sweden, Dr. Ingelo.I655"The First Anniversary of the Government Under His Highness The Lord Protector."I656Marvell and Dutton at Saumur, France.I657Marvell becomes Latin Secretary under Secretary of State Thurloe.I658"A Poem upon the Death of His late Highnesse the Lord ProtectorI659-78Marvell serves as M. P. for Hull.I660Intervenes in Commons to save Milton.I663-65Accompanies Earl of Carlisle as secretary on embassy to Russia, Sweden, and Denmark.I665England provokes war with Holland. "The Second Advice to a Painter."I666"The Third Advice to a Painter.""Clarendon's Housewarming."I667"The Last Instructions to a Painter." Downfall of Clarendon. War ends.I670"On Blood's Stealing the Crown."I672The Declaration of Indulgence. The Rehearsal Transpos'd.I672-74War with France as ally against Holland. Marvell as "Mr. Thomas" active in Dutch-based anti-French, anti-Catholic fifth column.I674Second edition of Paradise Lost, prefaced by Marvell's poem.I676Mr. Smirke: or the Divine in Mode.I677The Growth of Popery and Arbitrary Government.I678Marvell elected younger warden of Trinity House, London. Dies August I8.I68IMiscellaneous Poems published by "Mary Marvell."