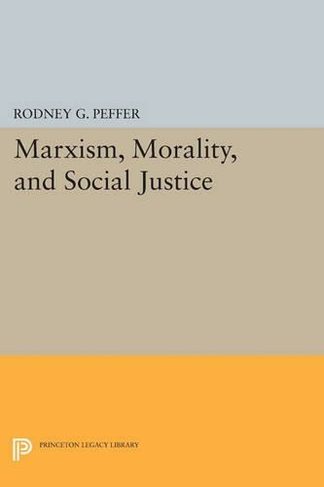 The interpreter of Marx's writings faces the task of reconciling, on the one hand, Marx's frequent explicit condemnations and criticisms of morality and, on the other, the obvious way in which his world-view reflects substantive moral judgments. In this book R. G. Peffer tackles the challenges of finding in Marx's work an implicit moral theory, of answering claims that Marxism is incompatible with morality, and of developing the outlines of an adequate Marxist moral and social theory. Peffer analyzes the moral components of Marx's thought and considers all the major interpretations of his moral perspective; he concludes that Marx is a mixed deontologist who is most committed to a maximum system of equal freedoms, both positive and negative. He then utilizes contemporary metaethical theory to show that Marxism is compatible with morality in general and with the concepts of justice and rights in particular. Peffer proposes a radically egalitarian theory of social justice (which subsumes Marx's own moral theory) and a minimal set of Marxist empirical theses, which together entail the Marxist's basic normative political positions. This book demonstrates that contemporary analytic political philosophy is invaluable for coming to terms with Marxism and that it is only Marx's less abstract empirical theories about classes and class struggle, the dysfunctions of capitalism, and the possibility of creating democratic, self-managing postcapitalist societies that are needed for the development of an adequate Marxist moral and social theory. Originally published in 1990. The Princeton Legacy Library uses the latest print-on-demand technology to again make available previously out-of-print books from the distinguished backlist of Princeton University Press. These editions preserve the original texts of these important books while presenting them in durable paperback and hardcover editions. The goal of the Princeton Legacy Library is to vastly increase access to the rich scholarly heritage found in the thousands of books published by Princeton University Press since its founding in 1905.